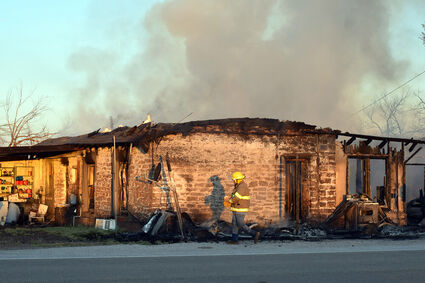 A Quay firefighter walks to a nearby firetruck after a suspicious blaze destroyed the village's former post office the morning of Oct. 20.

QUAY - A suspicious fire destroyed a tangible link to the more-prosperous past of the settlement of Quay, south of Tucumcari.

The blaze last week gutted a nearly century-old house that once served as a post office, store and gas station for the settlement of Quay decades ago.

The fire was reported shortly before 6 a.m. Oct. 20, and flames already had engulfed the structure by the time firefighters arrived.

No injuries were reported, and no one was home at the time. Nothing was left standing but the structure's thick adobe walls. It took Quay firefighters about five hours to control the blaze, and they were repeatedly called to the scene Thursday to cool down burning embers.

The fire prompted the closing of Highway 209 for about an hour as smoke curled low into the skies around the valley. Law enforcement officers began waving vehicles through the bottleneck one at a time shortly after sunrise.

Quay Fire Chief Gerald Hight, who called the fire suspicious, said a cornerstone of the house labeled its construction year as 1928.

According to one Quay County history book, the building once hosted dances in addition to serving as a post office, store and service station.

Allen and Danny Edwards watched stoically as flames licked the remnants of the collapsed roof of their childhood home.

Danny said he had lived at the home for much of his life until he became ill about three months ago, forcing him to move into his brother's house a few miles away.

He said about a week before, someone had forced open the door to the unoccupied house, stole some items and tried to set a fire in the middle of the living room.

Given those recent circumstances, he was sure the fire Wednesday wasn't an accident.

According to an incident report from the Quay County Sheriff's Office, state fire marshal investigator Shane Woodward said he believed the fire's origin was its doorway and would take a sample of the area to test for accelerant.

Hight said during a telephone interview Friday that investigators dug around the rubble and interviewed family members about the fire, but they came to no conclusions on what started it.

Danny said he couldn't get insurance on the home because its interior wiring was too old.

The Edwardses' mother, Ruthl Edwards, served as the settlement's last postmaster at the building until she retired. The Quay post office then was closed in 1995.

Quay School, built in 1929 and closed in 1955, is still standing and remains one of the few surviving links to the settlement's heyday.