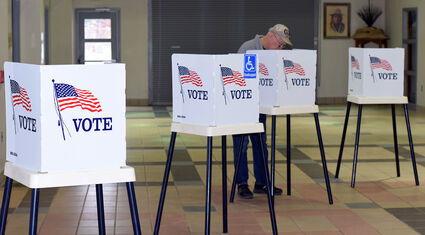 A voter fills out his ballot in the lobby of the Tucumcari Convention Center on Election Day while other voting booths stand empty. Fewer than 100 voters had cast ballots at midday, which was indicative of the light turnout locally and statewide.

Christopher Maestas, a retired educator, prevailed in a three-way race for the City of Tucumcari's municipal judge position in last Tuesday's local elections.

In a Tucumcari school board race, Robert Lucero prevailed over Cassie Huffman for Distri...