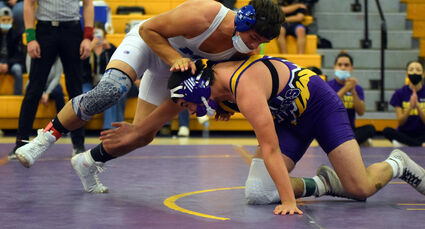 The Tucumcari wrestling team finished in a surprise third place on Saturday at its 10-team Rattler Invitational tournament, the Rattlers' best finish it at least a decade.

After what he called a disappointing performance the previous weekend at St. Michael's in Santa Fe, Tucumcari coach Eddie Encinias said he was pleased by his team's best finish at the Rattler Invite in 10 years and probably longer.

"It was a big difference a week later," he said. "It's really nice to place at your own tournament, especially when you have competition like Las Lunas and Tascosa. If you finish only behind them, it's a privilege ... it really is.

"I still think we have a lot of room for improvement. And we're going to improve," he added.

Encinias credited assistant coach Dennis Garcia for his team's rebound Saturday, saying he worked on his wrestlers' technique in the days leading up to the tournament..

Several other teams from Texas and Kansas were scheduled to compete but dropped out because of New Mexico's mask mandate or a COVID-19 scare.

Tucumcari had no individual champions during the event. Xzander Garcia and Reyes Garcia each finished runner-up in their respective weight classes as the Rattlers' top medalists.

Reyes Garcia fell during an 11-4 decision to St. Michael's' Matthias Duran in the 182-pound championship bout.

Also piling up points for the Rattlers:

Tucumcari's next meet will be Jan. 4 at Amarillo High School in Texas.

"The guys are picking it up," Encinias said. "I just hope we don't get complacent during the break. We start off again at Amarillo High. I hope we're ready to go."