Year in review: COVID-19 roars back in second half of year 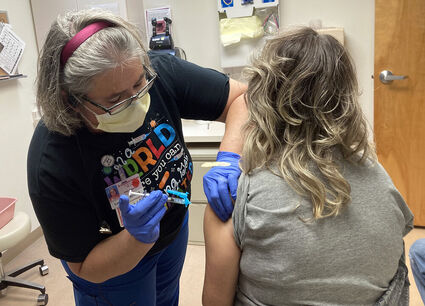 Lori Haden, a registered nurse at Trigg Memorial Hospital in Tucumcari, gives a booster shot of the Moderna vaccine to a patient on Wednesday. The hospital administered 60 booster shots of the vaccine last week, and Haden said more booster vaccination events were planned for this week.

Mere weeks after state officials eased COVID-19 restrictions, the disease came roaring back during the second half of 2021 in the form of the fast-spreading Delta variant.

The numbers tell the grim tale in Quay County: More than 1,000 confirmed cases of the disease were reported after July 1, more than tripling the total number since the pandemic began in early 2020.

The number of total COVID-19 deaths rose in the county from 11 on July 1 to 28 through Dec. 30. That included more than a dozen confirmed deaths in less than eight weeks in the fall.

State officials reported a vast number of hospitalizations and deaths from COVID-19 resulted among people who were unvaccinated, though waning efficacy of vaccinations more than six months old also played a smaller factor. Quay County's vaccination rate has lagged more than 20 percentage points behind the state average.

As a result of surging cases in general, the state reimposed indoor mask mandates, regardless of vaccination status, in July.

Later in the year, state health officials urged boosters of vaccines, citing declining efficacy after six months of the initial series of shots.

The specter of the Omicron variant, which first was detected in New Mexico in early December, also loomed. Health officials conceded Omicron was more contagious than any previous variant but remained unsure on the severity of its health effects or how effective vaccinations would be against it.

Here are the other top stories in the Quay County Sun, listed by edition date, during the second half of 2021.

July 7: A Tucumcari native fulfilled his dream of acquiring the city's oldest restaurant after working there as a young teenager. Chase Waters, 30, closed the deal on Del's Restaurant, which has operated on Route 66 since 1956.

July 14: The actions of two Tucumcari police officers will undergo an internal review after one was seen on video picking up and slamming a suspect to the ground during an arrest at a grocery store lot. The officers later were cleared of wrongdoing.

Mask mandate lifted for the vaccinated

July 21: New Mexico secondary-school students, along with teachers, staff and volunteers, will not be required to wear masks at school this fall if they show they're fully vaccinated, according to new guidance issued by the Public Education Department.

Aug. 4: David Brenner, owner of the Roadrunner Lodge Motel in Tucumcari, embarked on a quest he's planned for about seven years - restoring the west side of a long-closed property that was La Plaza Court motel.

Aug. 4: For the first time in 16 months, the Tucumcari Senior Center opened to serve meals to its clients inside its facility after being closed due to the COVID-19 pandemic.

Aug. 4: The Tucumcari City Commission approved a final budget for fiscal year 2022 that shows a deficit of about $417,000 and assigns spending cuts ranging from 2% to 7%.

Aug. 11: A bigger-than-expected crowd of an estimated 450 to 500 Tucumcari High School alumni descended on the city for the 50th edition of the Rattler Reunion.

Aug. 11: Quay County's road superintendent told county commissioners it will receive $1.5 million from the state to make safety improvements to the intersection of U.S. 54 and Airport Road northeast of Tucumcari.

Aug. 18: New Mexico's governor announced she was re-implementing a statewide requirement that all masks be worn in all indoor settings regardless of an individual's vaccination status.

Aug. 18: The Logan Board of Education was scheduled to vote on a resolution opposing the state's mask mandate, but divided board members removed it from the agenda before they could take action.

Aug. 25: The president of Mesalands Community College reported early enrollment at the college had more than quadrupled compared to the same time last year.

Sept. 1: A severe thunderstorm system that parked itself over Tucumcari for several hours caused power outages, flooding and property damage that included a wind gust ripping a roof from a Mesalands Dinosaur Museum storage building.

Sept. 8: Love's Appliance Sales & Service in downtown Tucumcari officially changed hands after being owned by Ray and Norma Love since 1973. Longtime employee Robert Marroquin took over the keys to the business.

Sept. 8: Tucumcari's population dropped slightly in the 2020 census compared to 10 years ago, but its decline was smaller compared to many previous census counts. The actual count also exceeded the U.S. Census Bureau's 2019 estimate.

Sept. 15: Two new murals commissioned by the founder of The Most Famous Artist collective were painted on buildings last week that were part of a larger effort to bring more art and economic development to Tucumcari, with a mural festival possible in the spring.

Sept. 15: Tucumcari homeowners likely would see an increase in their insurance premiums due to a fire-protection rating downgrade. The city manager expressed optimism it will have its previous rating restored before mid-2022.

Sept. 22: The Tucumcari chapter of the Altrusa International organization won an international award for its efforts in providing literacy products to local teachers.

Sept. 22: The Tucumcari City Commission during an emergency meeting accepted a proposal to buy a new ambulance after a county deputy's vehicle two days earlier crashed into and totaled its only well-working ambulance.

Sept. 22: The Logan Board of Education approved a resolution to the New Mexico Public Education Department that demands more local decision-making by school districts, but not before at least two residents criticized the board for not challenging the state's mask mandate.

Man walks away from crash at airport

Sept. 22: A Tennessee pilot walked away with no apparent injuries after his small plane crashed and burned at Tucumcari Municipal Airport.

Sept. 29: The city of Tucumcari will buy a demonstration vehicle to replace an ambulance damaged in an accident Sept. 13, using an emergency allocation from the state.

Oct. 6: A pioneering Tucumcari trucker, Betty Aragon, earned the Company Driver of the Year award and $25,000 during the Truckload Carriers Association's convention in Las Vegas, Nevada.

Oct. 13: The New Mexico Department of Health announced it is enacting crisis standards of care at hospitals because of widespread nursing shortages and stubbornly high cases of COVID-19, mostly among unvaccinated people.

Oct. 20: The Tucumcari City Commission unanimously approved a final version of its cannabis regulation ordinance after minor changes regarding outdoor cultivation of the plants.

Oct. 20: The San Jon and Logan school boards, wary of the alleged influence of critical race theory and other concerns, each voted to petition the state's education department to "pause" or slow a planned update of social studies standards.

Oct. 27: A suspicious fire destroyed a nearly century-old house that once served as Quay's post office, store and gas station decades ago.

Oct. 27: The Mesalands Community College board of trustees officially approved a final draft of its 10-year master plan that includes new residence halls, a black-box theater, a 9-acre solar farm and 11th Street being converted to the campus' main entrance.

Nov. 17: A Tucumcari man faced eight felony counts after he was accused of shooting at city police officers after an attempted traffic stop. No one was hurt.

Nov. 24: A man faced four felony criminal charges after he was accused of spraying bear spray on two people, then punching a Tucumcari police officer and trying to grab his weapons.

Nov. 24: A Tucumcari man was one of 10 people honored this year as New Mexico Magazine's True Heroes for his work in helping the poor and homeless via the Ministry of Hope.

Nov. 24: The Tucumcari City Commission spent a chunk of its meeting on Tucumcari Convention Center matters, including the facility's first fee increases since 2015.

Dec. 1: Three members of one family soon will open Tucumcari's first meat-processing facility in decades. Triple E Custom Meats southeast of Tucumcari only will butcher cattle and hogs for area farmers, but also wild game such as deer and elk during hunting season.

The number of deaths by suicide in Quay County jumped from one in 2019 to seven in 2020, according to data released by the New Mexico Department of Health.

Dec. 8: The principals for "Bands of Enchantment" reduced their request for city lodgers tax funds from $300,000 to $200,000 to produce a second season of the music television show in Tucumcari.

Dec. 15: A representative from the state's economic development department told Quay County commissioners that Paulita's New Mexico was considering a second location in Logan or moving its operations to Tucumcari.

Cannabis ordinance may need to be amended

Dec. 15: Due to a city attorney's oversight, Tucumcari's city manager said the town's cannabis ordinance will need to be amended or replaced, possibly delaying legal sales of recreational marijuana by local businesses in early 2022.

Dec. 22: Incumbent Anita Allen won a card draw against challenger Steve Foust to keep her spot on the House village board after their race in the November election ended in a tie. The other tie in the village board race was decided when one of the candidates conceded.