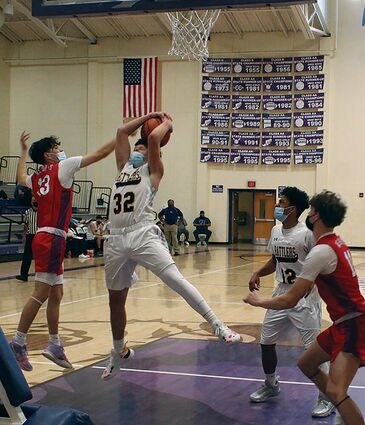 Tucumcari senior forward Andrew Henderson-Clark pulls down a rebound during first-half action Thursday against Estancia at the Lions Classic tournament in Santa Rosa.

The Tucumcari boys basketball team went 1-2 and finished sixth at the 15th annual Lions Classic tournament at Santa Rosa, including a 55-45 loss Saturday to Santa Fe Prep in the Rattlers' tourney finale.

Santa Fe Prep grabbed a 29-20 lead by intermission and made it stand up.

"We had a tough time matching up with them with their size," Tucumcari coach John Span said. "I thought it was a winnable game. We got ourselves down a little bit and battled back. Free throws was another big key to the game, also."

Tucumcari went 4-for-10 from the free-throw line.

"But we played some tough teams, and we went through some stuff that's going to help us later once we get into district play."

The Rattlers ended the week with a 5-10 record overall.

Henderson-Clark scored 10 of his game-high 18 points, including two key free throws with 30 seconds left, during a 41-40 victory Friday over Mora at the Lions Classic.

Span said it was a victory that nearly got away.

"We got up by 10 early in the fourth quarter but got a little careless with the ball," he said. "We were very fortunate to come out of there with that one-point win."

The Rattlers trailed 40-39 when Henderson-Clark was fouled with 30 seconds left. He made both free throws to give Tucumcari a one-point lead.

After that, the Rattlers made a steal and set up a stout halfcourt defense to keep Mora from scoring in the final seconds.

Despite the late heroics, Tucumcari again struggled at the free-throw line, going 7-for-13.

Mora ended the week with a 7-8 record.

Estancia jumped to a huge early lead and held on for a 71-63 victory Thursday over the Rattlers in the first round of the Lions Classic.

The Bears led 29-8 after the first quarter.

Span said his team rallied to within six points against the Bears, but erratic free-throw shooting short-circuited the Rattlers' chance at a comeback win. Tucumcari went 16-of-29 from the line.

"We missed more free throws than we lost by," Span said.

Estancia ended the week with an 8-3 record.

The Rattlers, after blowing a lead in the fourth quarter, rallied in overtime to seal a 49-42 victory over host East Mountain on Jan. 11.

Tucumcari staked a 36-30 lead after three quarters but scored just three points in the fourth period, setting up the comeback by the Timberwolves to tie the game at the end of regulation.

"We got in foul trouble against East Mountain," Span said. "It's a tough environment there, and it was two teams going at each other. We got into a spell there where we couldn't score. Fortunately, we made enough free throws to get the win."

Tucumcari scored 10 points in the extra period to salt away the win. Curtis Gonzales and Henderson-Clark each scored four in OT.

The Rattlers, who had been struggling at the free-throw line during recent games, made eight of nine foul shots during the extra period.

Jasper led the Rattlers with 17 points. Henderson-Clark added 12 and Gonzales 10.