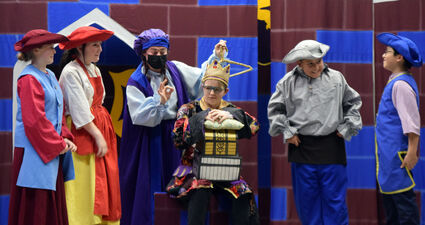 SAN JON - After more than a two-year hiatus due to the COVID-19 pandemic, San Jon Municipal Schools and the Missoula Children's Theatre hosted their annual stage production - this year, a musical/comedy version of "The Emperor's New Clothes" - on Friday night.

Guided by two co-directors or actors from the Missoula group, nearly 60 San Jon students ranging in age from kindergarten through high school performed in or assisted in directing the one-hour play.

San Jon has hosted Missoula Children's Theatre productions since 2009, and it typically draws an audience of more than 150 people.

JaTawn Wright, the school's internet technology director and library aide, said the play is a highlight not only for the San Jon community.

"The students look forward to this week all year," she said.

San Jon typically holds its annual Missoula production in November. But the 2020 production was canceled due to the pandemic. The November 2021 staging was delayed due to a local COVID-19 outbreak, though rehearsals had started earlier that week.

Wilson, who also acted as a backstage manager during Friday's production, said San Jon's children essentially picked up from where they left off in November.

"It was really easy for them to relearn all their lines and everything," Wilson said. "It went so perfectly."

That didn't keep at least a few of the student performers from being nervous Friday night.

"I felt nervous at first," said eighth-grader Nathan Erwin, who played the lead role. "Going in Monday, I felt detrimentally nervous. But going into today, I felt way better about it. I didn't feel calm; I just felt excited."

Wilson, who hails from Atlanta, said she's on the road a good portion of the time. She was in Colorado Springs the previous week and in Nebraska the week before. This week, she'll be in Denver.

Wilson acknowledged guiding dozens of children is like "crowd control," but she didn't leave the impression it was a big burden.

Wilson was asked what her goal was at the end of each production week.

"We just want the kids to have a good time," she replied. "If the kids have remembered a line that had forgotten for the entire week or they say it's their best week they've had in quite a while, that is the goal. The goal is for them to leave this week by having fun and have a love of theater."