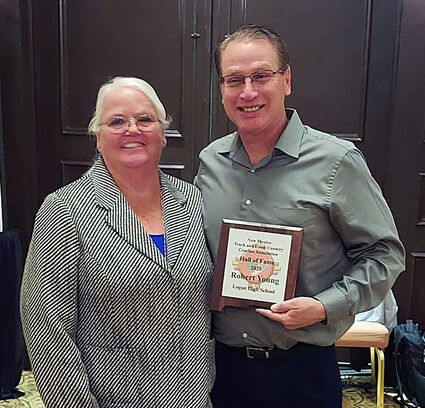 Logan's Robert Young poses Saturday with his New Mexico High School Track and Cross-Country Coaches Association's Hall of Fame plaque with Elaine O'Neal, who introduced him during the induction ceremony.

Robert Young was honored for his 38 years in coaching - including 10 at Logan - with his induction Saturday into the New Mexico High School Track and Cross-Country Coaches Association's Hall of Fame at Albuquerque.

In his decade at Logan, Young's girls track teams have won three state championships (including the last two seasons) and tw with the boys track squads.

Young also is Logan's high school volleyball coach - where his teams have won three state titles and appeared in the state tournament 17 times - and is the junior-high girls basketball coach.

Elaine O'Neal introduced Young during his induction. She was there when Young began his coaching career at Tucumcari and was a colleague during his years at Jal.

"He is a great coach," she stated in a Facebook post after the ceremony. "It is an honor to have worked with such an accomplished coach / teacher. Congratulations, Coach Young. Well deserved!"

Young, reached by phone Sunday, said he was humbled by the honor.

"I didn't really see it coming; I didn't know this was going to happen," he said. "But I've been fortunate here. I've got great kids and super assistants who've helped me out a lot. It's been good."

Young said he was nominated for the state's Track Hall of Fame by Joe Giglia, a former longtime track coach at Cimarron.

"I've known him for a long, long time ... since I started coaching in New Mexico," Young said. "He always was at Cimarron, and I got to know him. My teams competed against his at the state level, and we battled pretty good. We got to be pretty good good friends and often visited at track clinics."