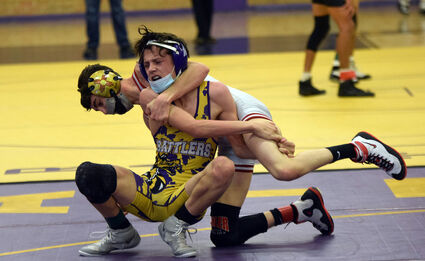 Tucumcari wrestler Nicholas Romero grapples with Robertson's Esequeil Mascarenas in the finals of the 113-pound weight class Saturday at the District 3A-1 tournament at Tucumcari. Romero rallied to defeat Mascarenas to become district champion.

The Tucumcari wrestling team qualified 13 athletes for this week's state tournament, but it was one eighth-grader who also can boast himself as a district champion.

Nicholas Romero, 18-7 this season in the 113-pound weight class, earned a dramatic come-from-behind victory in the finals of the District 3A-1 meet Saturday at Tucumcari. Trailing 4-2, he scored a takedown on Robertson's Esequeil Mascarenas, then pinned him with one second left to assure the victory.

Tucumcari coach Eddie Encinias literally jumped for joy at Romero's win, who had split two other district matchups against Mascarenas earlier in the season.

"We were hoping that guy would face him again because we were ready for it," Encinias said. "We already told Nick what to do. And Nick's a competitor anyway. He's a tough kid for an eighth-grader."

In girls wrestling, freshman MiKayla Klinger qualified for state for the second straight year with a fourth-place finish Thursday in the 152-pound weight class at the 32-team District 1 meet in Miyamura High School in Gallup.

Encinias said he had hoped five Tucumcari athletes would advance to Saturday's finals, but expressed satisfaction with his team's performances.

Xzander Garcia and Reyes Garcia each suffered shoulder injuries during their late-round bouts Saturday, but Encinias expressed optimism they'll be ready to go when the state tournament begins.

"Give them a little bit of rest, and they'll be all right," he said.

As for the girls district tournament, Klinger expressed satisfaction with her fourth-place finish Thursday, saying she was in a tougher weight class than during her third-place district finish last season. She will compete at the state tournament at Rio Rancho on Saturday.

Other Tucumcari girls who competed Thursday were Sarah Vellejo at 120 pounds, Sadi Collins at 100 and Naomi Garcia at 138.

"They looked good," said assistant coach Tim Clark, who guided them at the tournament. "They were wrestling girls who've been wrestling since they were youngsters."

Clark said next season, he reckons the number of participants in the Lady Rattlers wrestling program will at least double. He said Tucumcari will have a dedicated girls schedule by then and "get them more mat time."

"In a couple of years, we're going to be the ones everyone is looking out for" in girls wrestling, he said.