New life in a ghost town 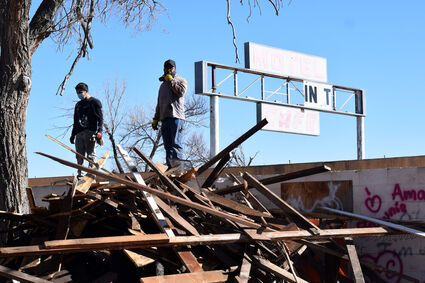 Workers stand on the walls of the State Line Cafe in Glenrio after removing the rotted roof from the structure as the Texas Longhorn Motel sign stands in the background. Two people in Texas recently acquired the restaurant, motel and other land in the Texas-New Mexico border town. They plan to put in a coffee shop, gift shop, RV park, recreational marijuana dispensary and possibly a motel there.

GLENRIO - This longtime Route 66 ghost town on the easternmost edge of Quay County suddenly appears to be getting its first business in more than 40 years.

Subcontractors from the Amarillo area descended on the Texas-New Mexico border town last week to set up a temporary chain-link fence around the long-abandoned State Line Cafe and Texas Longhorn Motel complex - the latter known for its sign that stated it was the first or last motel in Texas - and remove their rotted roofs.

The new owners, Glenrio Properties, plan to rebuild using the complex's existing stone walls to open a coffee shop, gift shop, RV park and perhaps a motel there. They've even set up a placeholder website at Glenrio.com.

A possible restaurant and a nearby recreational marijuana dispensary - just a few feet across the Texas line into New Mexico - also are in the plans. The dispensary almost certainly would be the easternmost legal weed shop in the state.

It would be the first business of any sort to set up in Glenrio since Interstate 40 bypassed it in the 1970s, said Roxann Travis, who has lived in the village for decades and works at the nearby Glenrio Welcome Center.

Glenrio Properties essentially is Lance Ollinger of Groom, Texas, and Gabi Tuschak of Austin. Ollinger is in the agriculture sector. Asked about her occupation, Tuschak stated in an email that "Glenrio is a full-time job for me that doesn't feel like one." Tuschak and Ollinger know each other because she is dating a longtime friend of his.

Glenrio Properties in December and January bought land on both sides of the Texas and New Mexico border in Glenrio.

Answering texted questions from the Quay County Sun, Tuschak replied in an email to explain her vision for the Glenrio project.

"Everything is still taking shape but the Longhorn Motel is where we'd like to offer coffee, retail, and a place to check in for lodging," she wrote. "We're exploring putting a restaurant in the east wing structure behind the motel and we're hoping to provide power and designated space for food trucks.

"This is a multi-phase project that we hope will grow into a destination or stop along the way for live music, food, drink and maybe even a swim! We're certainly not ruling anything out."

She also discussed the marijuana dispensary that she stated will be "committed to social and environmental responsibility" and be an "economic driver of Glenrio."

"There's solid research that shows how dispensaries significantly increase neighborhood safety and benefit the local TX and NM economies by creating job opportunities while increasing commerce and tax revenue," she wrote. "We definitely stand on the side of conscious consumption and are excited to help champion the therapeutic usages of cannabis."

She said Ollinger also saw an opportunity in the hemp industry "that was ultimately what started us on this adventure of buying and reviving Glenrio."

Tuschak said she initially wasn't committed to one set idea for the village.

"All we really knew was we were going to put it in an RV park. Everything else was inspired by the town. It's kind of been showing us what to do," she wrote. "It felt so ready to be reimagined and there was so much inspiration to pull from with its history and charming structures and unique location. I mean it's exit zero off of a busy highway, straddling a state line and a time zone, not to mention the gorgeous landscape. It really is a dreamer's playground. Ultimately we're just a couple friends with a wild idea and, for better or for worse, are insane enough to go for it."

Tuschak and Ollinger said they needed to remove the roofs from the motel and restaurant to assess the overall condition of the rest of the structure.

"We've been pleasantly surprised!" she wrote Saturday. "The structures we're renovating all have solid foundations and exterior walls, with a couple of small exceptions where we'll need to repair."

Ollinger said in a phone interview last week they want to incorporate as much of the salvageable structure of the complex as possible.

"There's so much history, we're excited, for sure," he said.

Tuschak acknowledged staffing the businesses will be a challenge in the isolated village, "so we intend to offer as much staff housing through the renovated motel rooms, RV park and eventually a tiny house village."

Because numerous Glenrio businesses failed decades ago with the I-40 bypass, why does Tuschak think she can succeed?

"I think Glenrio's failure was a sign of the times and I think its success will also be a sign of the times," she wrote. "What I mean is, in the '70s, developments in transportation, in this case I-40, was exciting as it offered opportunities to travel but an unintended and unfortunate consequence was it essentially cut off the economic lifeline of Glenrio as travelers bypassed the town all together.

"Fast-forward to 2022 and I think the reimagining of Glenrio will be a reflection of a common desire for simplified living. While I think we all yearn for adventure, this one is a quiet one that I think will appeal to the basic desire to enjoy life and to feel connected to each other. It's a bit of an escape and also an opportunity to be more present," she added. "Our company decisions have been guided by what we want for ourselves and for the community. I think success follows authenticity and we certainly have that going for us."

Glenrio was founded shortly after the turn of the 20th century as a siding for the Rock Island Railroad. The Ozark Trail, a precursor to U.S. 66, also was routed through there.

Though its population rarely surpassed 100, Glenrio remained busy for decades because of Route 66, with scores of businesses catering to travelers.

Once I-40 bypassed it, the town shriveled quickly, all the businesses closed, and Glenrio contains fewer than 10 residents.

Even in its nearly deserted state, Glenrio has become somewhat of a destination. The town and its 17 deserted structures have been placed on the National Register of Historic Places. A Pixar film crew cited it as a key inspiration to "Cars," the Route 66 animated film from 2006. Route 66 travelers stop there to gaze at the ruins and imagine what it would have been like during its heyday.

That's why the news of new businesses in Glenrio has prompted not only excitement from Route 66 aficionados but also mixed feelings, said West Texas A&M marketing professor Nick Gerlich.

"Glenrio is a portal unto the past, offering a glimpse of the mid-century glory that put it on the Route 66 map. Even in what some may say looks like post-apocalyptic decay, it pulls people in to imagine what life was like there before the coming of the freeway," Gerlich wrote in an email.

"I can understand why some may have mixed emotions about new development. It necessarily involves change, and in the process, the silence of abandonment will be replaced by new paint, windows, and roofs, bright lights and an influx of people. That scene may not match what we have had to imagine for all these years."