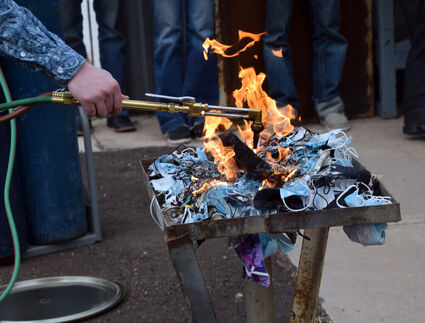 House High School agriculture teacher Justin Armstrong uses an acetylene torch to light a pile of masks on fire on Monday. Students and faculty celebrated the end of New Mexico's mask mandate with a mask-burning ceremony.

New Mexico's governor on Thursday lifted the mask mandate for most indoor settings that had been in place since August, effective immediately.

Gov. Michelle Lujan Grisham, taking off her mask, made the announcement early Thursday afternoon during a news conference after the conclusion of the New Mexico Legislature's 30-day session. She cited rapidly declining COVID-19 infections and hospitalizations for the move.

"I want to express my gratitude to every New Mexican who has steadfastly worn a mask, gotten vaccinated, and done everything in their power to protect their neighbors, as well as the heroic health care and frontline workers who have courageously supported our communities during this uncertain time," Lujan Grisham stated in a news release.

"Given the continued drop in hospitalizations and the lessening of the burden on our hospitals, it's time to end the mask mandate. With vaccines, boosters and effective treatment options widely available, we have the tools we need to protect ourselves and keep our fellow New Mexicans safe."

The number of COVID-19 hospitalizations in New Mexico has dropped by more than a third since the end of January.

The state's Crisis Standards of Care declaration that rations healthcare at crowded hospitals will expire March 11.

The decision on masking in schools was left up to governing school bodies.

Though a handful of schools in New Mexico kept mask mandates in place, Quay County schools made that only an option.

On Monday morning, the San Jon school board in a special meeting voted to make masks optional.

Labeling masks as "a personal choice," board member Dale Bone moved that students and teachers no longer be required to wear them.

"If they feel safer (wearing them), I don't have an objection," he said.

"Individuals will have the option to continue to wear a mask if they choose to do so," Tucumcari Public Schools stated Thursday in a social medial post. "If you want your child to wear a mask at school, please inform your child's teacher."

"If you would still prefer that your child wear a mask please let us know so we can make that happen," a text from House Municipal Schools stated Thursday.

On Monday morning, a High School School agriculture teacher used an acetylene torch to burn masks during a ceremony to celebrate the end of the mandate.

Three more confirmed COVID-19 deaths were reported last week in Quay County, though all of them had occurred more than 30 days ago. The New Mexico Department of Health states that some death certificates are delayed.

The latest deaths in the county reported were:

• A man in his 50s who was hospitalized and had underlying conditions;

• A woman in her 80s who had underlying conditions.

The death toll in Quay County rose to 47 since the pandemic began in spring 2020. A total of 39 of the deaths have occurred since late May.

The total number of confirmed COVID-19 cases in Quay County last week was 18, including three on Friday. That compares to 21 cases the previous week and 42 the week before that.

The total number of cases in the county rose to 1,961 since the pandemic began in spring 2020.

According to epidemiology reports, Quay County's COVID-19 case rate fell to 46.8 new cases per 100,000 people from Feb. 1 to Feb. 14, continuing a sizable decline from the 75.7 rate in the previous reporting period. Quay County ranks in the bottom seven counties in the state in transmission rate.

A total of 1,735 people in the county were deemed by the DOH to have recovered from the virus.

These COVID-19 rapid responses in the county were reported last week:

A typical rapid response consists of isolating positive cases, quarantining close contacts, ceasing operations to the extent necessary to isolate affected areas, disinfecting these areas, implementing safety procedures and resuming operations. Typically, operations are ceased for fewer than 24 hours before it is safe to reopen.

In New Mexico, the seven-day daily case average fell to less than 1,000 by Friday, compared to more than 1,500 the previous week.

A total of 997 new cases of coronavirus were reported in New Mexico on Friday. That raised the total since the pandemic began to more than 507,000.

A total of 402 people were hospitalized in New Mexico with the disease Friday, a decrease of almost 100 from the previous week.

Twenty-nine COVID-19 deaths were reported in the state Friday, raising the total to 6,775.

The total number of active cases in the Amarillo metro region plummeted Friday to just over 5,900. That was a drop of more than 4,000 from the previous week and a drop of about 3,000 the week before that. The active-case count in the metro was about 300 last summer.

The Amarillo metro area's hospitalization rate also has dropped by more than half in less than a month.

The disease has killed 1,110 people in the Amarillo metro since the pandemic began.

In the U.S., more than 78.4 million people have been confirmed with COVID-19 since the pandemic began, with more than 934,000 deaths, through Friday.

According to state data through Friday, 53.1% of Quay County residents have been fully vaccinated against coronavirus. That was an increase of 0.6% from the previous week.

About 60.6% of county residents have received one shot of COVID-19 vaccine through Friday, an increase of 0.3% from the previous week.

In New Mexico, 77.8% of eligible residents had been fully vaccinated by Friday, with 91.7% receiving at least one dose of vaccine.

The Quay County Courthouse and Quay County Extension Office, both in Tucumcari, each are offering free rapid tests.

FindATestNM.org also provides links to those who wish to receive free tests by mail order.