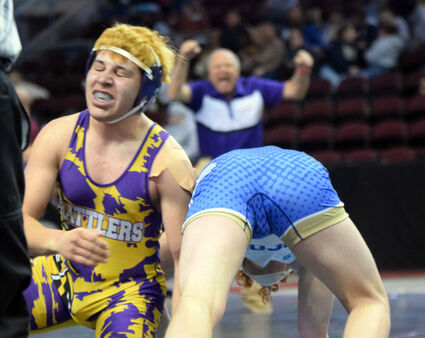 Tucumcari's Xzander Garcia smiles as the clock winds down to zero in his victory over Socorro's Warren Kurtnaker in the 170-pound wrestling final Friday at the Rio Rancho Events Center. Tucumcari coach Eddie Encinias celebrates in the background.

Two other Rattler wrestlers finished third at state in their respective weight classes.

Garcia, who finished with a 20-9 record, kept scoring takedowns against Socorro foe Warren Kurtnaker during the final in an 8-2 victory. The match left little doubt early who would prevail, and Tucumcari coach Eddie Encinias could be seen rejoicing as the clock ticked down to zero.

Garcia's dominating run Friday followed a fourth-place finish the week before at the district championships, partly due to a minor shoulder injury he suffered.

"I took a couple of days off to let my shoulder recover, just rest it up a little bit, and make sure I was 100% to come back," Garcia said after his triumph Friday. "It's always good to come back the next weekend, stronger than ever.

"I always tell myself to put everything in the past and just work for the future, and that's what I did. I bounced back from last weekend and upset everybody in this tournament. I couldn't have done it without my coaches and my amazing teammates pushing me in practice."

Encinias said he was mindful of giving Garcia a chance to recover after the district meet.

"We took care of him this week and brought him back slower," Encinias said. "After he beat the Robertson kid, I thought, 'This is on now," because he very convincingly beat him. He really looked strong and back to normal the way Xzander should look.

"We thought it could happen, and it did happen."

Eight Tucumcari wrestlers advanced through Class 3A quarterfinals, but all but Garcia hit a brick wall in the semifinals. Nick Romero (23-8), the district champion at 113 pounds, bounced back to take home a third-place medal, as did Isaiah Garcia at 120.

"I wanted a better outcome simply because it's a big difference for next year when you place at state," Encinias said. "But even the guys that finished fourth and didn't medal, that's a big placement and places a seed for next year."

Romero came within an eyelash of moving to the championship match. The eighth-grader led 3-2 in the final period of his semifinal, but Robertson foe Esequeil Mascarenas scored a late reversal to win 4-3. Romero edged Mascarenas in equally dramatic fashion in the finals of the district meet.

Isaiah Garcia (10-15), a sophomore, bounced back from a 120-pound semifinal loss by pin to Branden Martinez of Robertson to defeat Isaiah Ocampo of Socorro in the third-place match.

Encinias turned effusive about his eighth-graders: "The things they've done are just remarkable."

The coach also praised senior Reyes Garcia (13-9), who gutted his way to a fourth-place finish in the 182-pound weight class despite chronic problems with a shoulder.

"For him to even get there is a good thing," he said.

Other Tucumcari wrestlers at the state meet:

• Diego Martinez (13-14), a freshman, lost in the quarterfinal and consolation round at 138 pounds.

• Antonio Gonzales (9-15), a sophomore, advanced to the semifinal but lost his next two matches at 160 pounds.

• Nate Aragon (13-18), a senior, suffered a probable concussion during his quarterfinal match and was forced to withdraw.

Tucumcari finished fifth in the Class 3A team standings with 94 points. West Las Vegas edged Socorro 189-180 for the team title. Robertson finished third with 145 points and Cobre fourth with 115.

"She wrestled really hard," Encinias said of Klinger. "She had some really stiff competition, especially in that weight class. She's young, and she will just get better and better."

Encinias, who finished his 20th year in guiding the Tucumcari wrestling program, was noncommittal on whether he would return next season ("We'll talk about that later").

But when the New Mexico Wrestling Hall of Famer talked about his athletes, he didn't sound like someone who was ready to retire just yet.

"I'm really, really proud of these guys. Man, the effort they put out, the hard work they do every day in the gym, they're just amazing kids," he said. "This is a great group, and we lose just two (seniors) off this team. They're exciting."