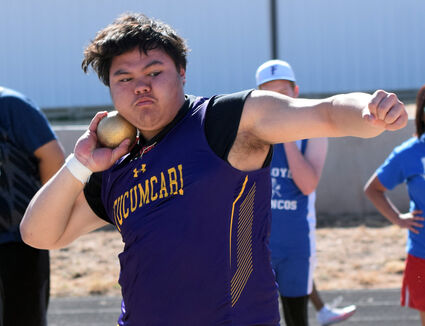 The Logan boys and girls track and field squads showed they'll be a regional power again by besting 17 other teams and winning the season-opening Rattler Relays at Rattler Stadium on Saturday.

Host team Tucumcari finished a strong fourth in both the boys and girls divisions. Tucumcari was buoyed by a double-champion Khobie Salvador in the weighted field events for the boys, along with champion Delilah Acosta in the girls discus.

Santa Rosa was third with 62 points, and Tucumcari was right behind with 56.

Tucumcari coach Wayne Ferguson said his boys team probably would have done even better had javelin thrower Andrew Henderson-Clark had competed in that and a few running events, but the senior was competing at a basketball all-star game that day.

"For the first event, I was pleased," Ferguson said.

"I was really pleased with the girls," Ferguson said of the Lady Rattlers. "It's just that I know the boys and girls aren't in really good shape right now. It's going to take a while to get to that."

Champions for Tucumcari were:

Salvador's distance in the shot put met provisional standards in qualifying for the state meet.

Rattler Relay champions for Logan were:

Logan's teams piled up more points with second- and third-place finishes in many events.