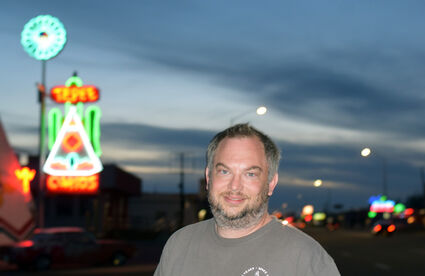 Nolan Stolz poses in front of the neon signs of Tee Pee Curios and Blue Swallow Motel along Route 66 in Tucumcari. He is traveling Route 66 to soak up inspiration for his forthcoming "Route 66 Suite" symphonic work.

A South Carolina-based music composer recently was in Tucumcari to soak up inspiration for his forthcoming "Route 66 Suite" orchestral composition.

Nolan Stolz said he's found plenty of it in this region.

"I have very specific things about Tucumcari that will go into the music," he said.

Stolz, an associate professor of music at University of South Carolina Upstate, took a sabbatical in July to travel Route 66 and conduct research for his symphonic piece. He said he tries to stay overnight at least once in the towns and cities along the historic highway.

Recently, he was spending his fourth night in Tucumcari, this time as the Blue Swallow Motel. The other nights were in Motel Safari or Roadrunner Lodge Motel.

For "A.D. 1926," Stolz said he travels original alignments of Route 66 "to get a feel of what those travelers saw on that road."

He said that includes gravel-road Route 66 east of San Jon and the original path north of the railroad tracks west of Tucumcari. Stolz said he also is looking at older buildings in downtown Tucumcari, as many early Route 66 travelers would have sought out those businesses during stops.

Stolz said most of the gas stations in Ruscha's book have been demolished, including the one at Second Street and Tucumcari Boulevard. But he noted in his research the Tee Pee Curios gift shop in Tucumcari operated as a gas station during the 1940s.

"The Tee Pee Curios will be one of the 26 gas stations in mind inspiring my piece," he said.

The "66 Ghost Towns" movement not only is inspired by the Quay County ghost towns of Glenrio and Endee, but small settlements once on maps such as Revuelto and Rudolph that have disappeared entirely. Stolz said he goes to those locations and "imagines what it might have been like at the time."

Stolz, a native of the neon mecca of Las Vegas, Nevada, said for his "Neon Dreams" movement, he particularly was inspired by the blinking neon signs of the Blue Swallow Motel and Tee Pee Curios.

"One thing I noticed with the Swallow is it's on a little bit longer than it's off," he said. "I counted it out, and it's like a 3-to-2 ratio. It's an interesting, uneven rhythm. Then the bright colors of the sign would imply a very bright-sounding harmony or instruments.

"Then I have some other instruments doing a different rhythm; that could be the Tee Pee Curios, for instance. I plan to have all of these simple music ideas all at the same time so it's like cacophony but to where it works musically together. It's a street scene of these various neon signs animated together."

"The desert is so different from the rest of 66," Stolz said. "It has a different look and a different culture about it. Plus, growing up in Las Vegas, I have an affinity for the desert. If you're going through Texas from the east, it slowly becomes more desert-like as you go west."

For the closing "The Show Will Go On," Stolz said that will refer to old theaters on or near Route 66. That would include Tucumcari's Odeon Theatre or long-defunct Canal Drive-In.

"Yes, we stream movies at home, but there is nothing like going to a theater or drive-in and seeing it with other people," Stolz said.

On a recent Saturday night, several residents made arrangements so Stolz could tour the Odeon as it undergoes renovations. Most of the neon on the 1936 art-deco theater had been repaired just a few days before and was lighted just for the occasion. Stolz walked through the closed balcony and checked out the projection room, from where he peered out the windows get an up-close look of the neon.

Odeon owners Robert Lopez and Christy Dominguez said they want to reopen the theater by Tucumcari Rawhide Days weekend in late April and early May for the event's inaugural film festival. The Odeon has been closed for two years, largely because of the COVID-19 pandemic.

Stolz, who composed a symphonic piece for the Lincoln Highway in 2013, said he originally envisioned the "Route 66 Suite" at 20 to 25 minutes. That has swelled to 45 minutes to an hour once he got behind the wheel.

"Once I started driving, I found out there was a lot more depth to this," he said.

Stolz said he typically takes photos and video of the places he's researching, then sits down each night to write a few paragraphs on what he experienced that day. Other than a few tidbits of musical ideas, he's not doing much composing.

"I want to fully understand the road before I write the music," he said. "I want this to be the most honest piece of music I can write. I didn't want any preconceptions about the road. I wanted to really know all the places ... not just the popular places and cities, but the small towns between the cities and the rural spaces between those towns. I knew I'd have to spend a great deal of time on the road to really know it."

Once his sabbatical ends in August, Stolz said composing "Route 66 Suite" will begin in earnest. He estimates that will take 18 months to two years.

His goal is to get a few preview performances of "Route 66 Suite" shortly after that, then have orchestras around the country - especially along Route 66 - play it during the highway's centennial in 2026.

Stolz said he's met with symphony directors in Albuquerque, Flagstaff and Tulsa so far about his forthcoming piece. Because his story has been picked up by news outlets across the country, including the Associated Press, interest in the "Route 66 Suite" has gone far beyond that stretch of highway.

As for recording "Route 66 Suite" in a compact disc format, Stolz was less optimistic it would happen soon.

"It's very expensive," he said. "I'd probably have to come up with $50,000 to record it. Hopefully someone with deep pockets can see the value and fund this before 2026 rolls around."