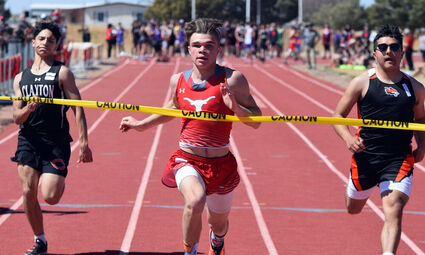 LOGAN - The Class 1A track and field championships are weeks away, but Logan already appears to be strong contenders.

Both of Logan's boys and girls rose to the top in the team standings of the 15-team Logan Varsity Meet on Saturday, with several athletes logging qualifying times or distances for the state meet.

"I felt like both teams competed well, considering we were on spring break last week," Logan coach Robert Young said, noting several athletes also improved their times in previously state-qualifying events. "We have a lot of experience coming off last season."

Other winners for the Lady Longhorns:

Young also said Desta Rose qualified for state in the high jump and Robertson in the pole vault.

The Tucumcari girls finished a strong third with 62 points, seven behind the Lady Lions.

The Tucumcari boys finished in a tie for fourth with Maxwell with 43 points.

Winners for the Rattlers: