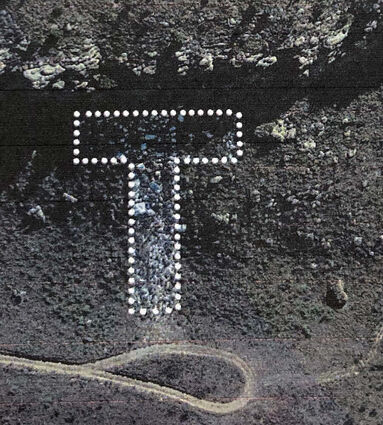 This artist's rendering shows an outlined "T" on the north face of Tucumcari Mountain as part of a Rotary Club plan to add lighting and reflective aluminum plates to make the letter stand out more.

The city's Lodgers Tax Advisory Board heard a funding proposal from Rotary Club of Tucumcari to refurbish the big "T" on Tucumcari Mountain so it's brighter at night and stands out more during the day.

Robert Hockaday and his son, Bobby, made a formal presentation about the "T" project during a board work session that also considered presentations from events and entities requesting financial assistance of motel tax funds during the 2023 fiscal year.

The Rotary Club in late 2020 relighted the "T" on the northwest face of the mesa using 32 solar-powered lights.

Under the new proposal, Robert Hockaday said the refurbished "T" would be "10 times brighter" and would allow more people to see it.

Hockaday explained the plan is to replace the lights with 180 or nearly 360 solar-powered lights, depending on the letter's design, along with white aluminum plates anchored to the light bases so the letter is more easily seen in daytime.

The document the Hockadays presented to the board recommends a "T" outline. The 18-inch aluminum plates would be painted with latex solar reflective paint "that would show up brilliantly during the day," it states.

"We would also add new lights that would be aimed differently than what is currently up, aiming them so they are visible to the east and west parts of Tucumcari," it states.

The other lights-and-plates option would be a simple "T," or "skeleton" design, that uses fewer materials. It would be similar to the current lighted "T," except with more lights and the plates.

Another option is using about 350 white paver stones to outline the faded "T," but Hockaday said it is "not acceptable" because of its cost and requires more labor.

The Hockadays said the cost would be $6,000 to $12,000, depending on the "T" design used. Board Chairman Matt Bednorz said if approved by the city commission, funds probably would come from lodgers tax executive funds.

The Hockadays said the proposal would require permission from two owners - one who has road access and the other who owns the mesa's north face - for Rotary Club volunteers to do it. Bobby Hockaday said the club "has a good rapport" with one of the owners who allowed the big "T" refurbishment in 2020.

Board member Lila Doughty said she approved the proposed lighting improvements to Tucumcari Mountain's "T" and especially supported anything that would make the letter stand out more during daylight hours.

The board did not take action on the proposals, as it was a work session and the item wasn't on the agenda. The board's next meeting is April 6.

The mesa's "T" for decades had been whitewashed annually by Tucumcari High School's senior class until recent years, when new owners restricted access because of littering and other problems.

Last month, a Tucumcari man was arrested after being stranded on the side of the mesa for hours. He was denied access by one of Tucumcari Mountain's owners earlier that day.

The Rotary Club also proposed installing solar-powered "fairy lights" in the high branches of trees in select areas of Five Mile Park so they wouldn't interfere with stargazers.

The rest of the meeting was spent on lodgers tax fund requests for events and tourism entities.

Connie Loveland of Tucumcari MainStreet presented her formal requests of $2,000 for Down at the Depot events and $9,000 for the annual Fired Up festival, both in the railroad plaza.

She said the Down at the Depot events would take place the last Saturday of each month from June through August, with an emphasis on art and music. The $2,000 request would cover advertising and printing, she said.

City Manager Mark Martinez said Brian Whitcomb of Hot Pan Productions would give his presentation at the board's April 6 meeting for a request of $25,000 in lodgers tax funds for the Rockin' Route 66 festival in June.

The board also has received aid requests of $43,575 from the Tucumcari Historical Museum to hire a part-time employee, renovate windows, doors and lighting and two billboards, plus advertising and portable bathrooms for tour-bus companies and $38,200 from the Tucumcari/Quay County Chamber of Commerce to continue its activities and account for the office's larger role.

Martinez said he also received a late application from Rattler Reunion organizers for a request of $7,386.29 in lodgers tax funds for the August event.

Martinez said he still wants to hire an events coordinator for the city but acknowledged the time frame is difficult to do that and organize a small revival of the Pinata Festival in June.

"It's going to be tight to put an event together in three months," he said.

No application was submitted for the 2023 edition of Tucumcari Rawhide Days, which typically takes place in early May. Karen Alarcon, a former and present co-organizer of the festival, complained about a lack of help in putting on the event.