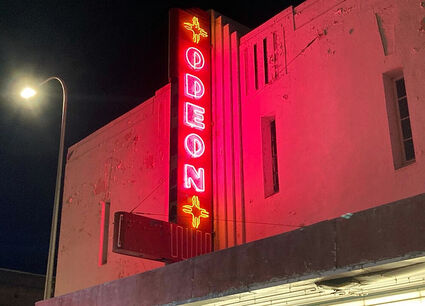 Tucumcari's Odeon Theatre is shown shortly after its neon lighting was repaired in March. Tucumcari Rawhide Days had planned to use the Odeon for a film festival, but technical problems and other complications have forced a move of the film screenings to the Mesalands Community College's wind-energy center lecture hall.

A new film festival for this weekend's Tucumcari Rawhide Days was supposed to serve as a soft reopening of the city's historic Odeon Theatre, which has been closed for more than two years due to the COVID-19 pandemic.

However, because of technical problems and other difficulties, the 1936 theater won't open for several more weeks. Instead, the film festival primarily will be in the lecture hall of the Mesalands Community College's wind-energy center on South 11th Street.

Lopez explained during a phone interview Friday the projector's sound system in the theater was "fried," and parts would have to be ordered to repair it.

Lopez also said new flooring and a remodeling the concessions area - the latter which was destroyed by termites - was "going a lot slower than we anticipated."

They also need to install air-conditioning systems for the concessions area and the projector room's sensitive electronics.

On top of that, Dominguez last week received a federal jury-duty summons for this week in Albuquerque.

So the couple called Hockaday and told him the Odeon would be unavailable this week.

"Everything was not coming together," Lopez said.

Hockaday indicated he took the bad news in stride.

"It was a damper, but there was calm chaos. We did have backup plans in place," he said.

Lopez and Dominguez said they remain hopeful for a late May opening of the theater, which screened its last film on March 15, 2020.

"We're a month away from opening, at least," he said. "Now that we're not pushed for time by Rawhide, we'll probably take our time and do other stuff."

"The actual remodel is turning out really beautiful," Dominguez added. "Everything that we're putting in place will be really nice, really clean."

Hockaday said he received about 40 submissions for the film festival. The Quay County Fairgrounds will host a screening of the one-hour documentary "Tales from the Chuckwagon" on Friday evening, with the rest of the films being shown at the wind-energy center on Friday and Saturday. Most are short films.

Hockaday said he will whittle down the total number of films to about 28.

Much to his surprise, entries have come from all over the United States, plus Canada, China, France, Germany, Mexico, Spain, Australia and Tanzania.

"We were thinking for triggering the local creatives to submit work," Hockaday said of the initial premise of the film festival. "But we ended up getting more from the outside. Maybe people will see what's there and start making stuff on their own, which would be really cool."

"I have helped him screen a lot of them, and there are a lot of good ones," Connie Loveland, executive director of Tucumcari MainStreet, said of the short films.

One of the documentary shorts will be "Ghost Town," about the defunct coal-mining city of Dawson, New Mexico, that once had a rail line that connected to Tucumcari.

Tucumcari Rawhide Days' chief organizer, Karen Alarcon, said adding a film festival is a twist, but a natural one.

"The premise of the film festival came to mind because 'Rawhide' TV show was filmed here," she said referring to the western drama starring a young Clint Eastwood and Tucumcari native Paul Brinegar that aired from 1959 to 1966 and served as the festival's inspiration. "The state's film industry is booming, and I thought we might ought to capitalize on that. I think 40 submissions is phenomenal for a first-year event."

Rawhide Days also has moved some of its activities from the Tucumcari Convention Center to Tucumcari Historic Railroad Plaza near downtown.

When asked why, Alarcon said, "Because it's beautiful. I just love it down here. I just love the depot. This is a cool place."

Loveland said she didn't need much persuasion to use the depot area for Rawhide events.

"Of course I said, 'yes.' Why wouldn't I want more people down here?" she said.

Another new event is Texas Longhorn Breeders Association Show at noon Saturday at Quay County Fairgrounds. Organizers originally were hoping for 100 entries, but higher fuel prices and another Longhorn event the same weekend have tempered that expectation to 25 to 50 entries.

Rawhide Days also will continue with its old standbys, including kickoff activities at the Tucumcari Historical Museum on Friday, the Longhorn cattle drive and parade on Route 66 at 10 a.m. Saturday and western demonstrations at the fairgrounds.

The full festival schedule can be found at tucumcarirawhidedays.com.

As for a 2023 edition of Tucumcari Rawhide Days, Alarcon admitted its future is uncertain. Rawhide Days also didn't request any lodgers tax funds for the 2023 fiscal year.

"We're going to see. I'm trying to find someone to take it over," she said.