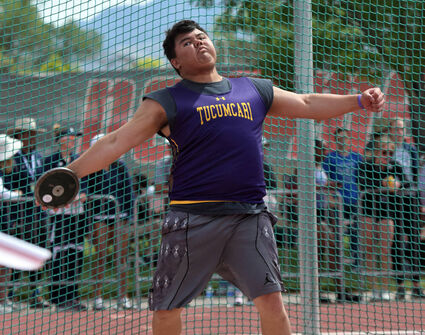 Tucumcari senior Khobie Salvador unleashes on of his long-distance discus throws during the Class 3A finals Friday at the UNM Track-Soccer Complex in Albuquerque. Salvador won that event and finished second in the shot put.

ALBUQUERQUE - Tucumcari athletes nabbed a total of three individual state championships and came within an eyelash taking a fourth during the NMAA Class 3A Track and Field Championships last weekend.

Senior Khobie Salvador won the boys discus throw Friday and was leading the boys shot put Saturday until his closest rival made a clutch throw in the championship round to pass him.

Sophomore Haisley Huffman won the girls long jump by the closest of margins.

And senior Delilah Acosta undoubtedly had the best day of her life in the girls discus throw, beating her previous best effort by 16 feet to win that title.

Salvador's strength in the discus event was apparent Friday morning at the UNM Track-Soccer Complex. At one point, he threw the disc what appeared to be nearly 150 feet, but it landed out of bounds. So was another throw.

Assistant coach Bryan Dunlap, who told Salvador before the meet to "think big and have fun," didn't panic and told his athlete the problem wasn't a big one.

"We just adjusted where he started in the back of the ring and straightened that out," Dunlap said. "It was an easy, easy fix on that kind of stuff. We didn't mess with his technique whatsoever. We got him in the finals, and we went big in the finals."

Salvador threw the discus about 130 feet in the preliminary round, which easily qualified him for the finals.

In the finals, he uncorked a throw of 137-3 - besting his previous best by five feet and surpassing the runner-up by nearly 12 feet.

"They told me to take a step to the left around the circle, just help me get (the discus) down the middle. I guess it worked, because I'm state champ now," Salvador said.

Salvador's victory was assured when he prepared to take a final throw in the finals. One of his knees buckled right before he was set to throw, and he fell. After coaches examined his leg, he was able to stand with assistance and soon was walking and taking congratulatory handshakes from his rivals - plus a bear hug from Dunlap.

"I feel ecstatic. I'm more happy than I've ever been," Salvador said as he prepared to walk to the winner's stand.

During the shot put Saturday, Salvador was in the lead late in the finals with an effort of 46 feet, 6 inches. But Navarro Burnside of Crownpoint unleashed a final throw of 47 feet, 2 inches to snatch the first-place medal. Salvador settled for a second-place medal.

In the girls long jump Friday, Huffman won the state title by a mere quarter-inch over Dexter's Nayeli Cobos.

Early in the finals, Huffman soared 16 feet, 6 1/4 inches. She said she and assistant coach Gary Hittson set a goal of 17 feet at the meet.

Huffman didn't jump that distance. Nobody else did, either. The closest anyone came was Cobos, at 16 feet, 6 inches.

After Huffman's victory was announced, her mother Cassie jumped out of the nearby bleachers and hugged her daughter.

Perhaps the most unexpected victory was Acosta's state-winning effort in the girls discus throw on Friday afternoon.

Acosta was ranked in the top three going into the state meet but still was considered a longshot. But once the event began, she consistently made strong throws.

He best effort was 103 feet, 9 inches, which beat the runner-up by almost nine feet. Acosta's second-best throw would have won the state championship, as well.

She and Dunlap exchanged mutually tearful hugs after her victory was apparent.

Acosta admitted she was more mentally focused than she'd ever been.

"I think it was knowing it was my last year, and I wouldn't be able to do it again after this," she said. "I think my dad being here had a lot to do with it. I think I've always knew what to do. I was just pretending I was back at home, back in practice. That made my mental state a lot better.

"It feels really good," she added. "I'm glad I made my dad proud and my family at home. I can tell my grandparents and my brother that I got a first-place medal for them. That's my main golden moment for me."

Dunlap still was emotional minutes after Acosta walked to get her first-place medal.

"She's one of those kids who has so many distractions going on in her life. The fact she was able to put that aside and come out here and do what she needed to do ...

"She just has to believe she's capable of doing it. Today, she did. I'm happy for all these athletes, but especially her."

In the girls shot put Saturday, Acosta failed to advance out of the preliminary round.

Other Tucumcari athletes who scored team points at the state meet: