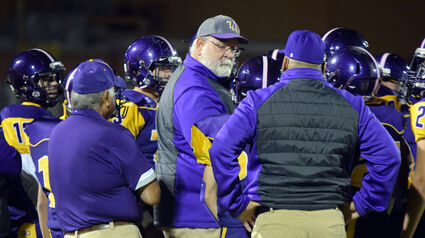 Tucumcari High School head football coach Wayne Ferguson (center) listens to one of his assistants during a timeout in a game last season. Ferguson resigned Thursday from the position after 10 seasons.

To hear Wayne Ferguson tell it, he resigned Thursday as Tucumcari High School football's head coach because the opportunity presented itself to do so.

Ferguson explained in his office Friday morning his stepping away from football had been "in the works the past few years," but the timing wasn't right.

"I let my bosses know in August if we have somebody we could bring in, I'd rather not (coach football)," he said. "We mutually made a decision that we were going to try to find a coach to fill that teaching position.

"There's a good, young corps of athletes (on the team) right now. It's a good time for somebody else to come and take over - especially while I'm still here so I can help mentor a new coach."

After submitting his resignation as head football coach on Thursday, he said he informed as many returning players as he could, but others spread the news, too.

"It spread like wildfire," he said. "I got tons of texts from coaches and former players from all over."

Ferguson said if the school district can't hire a history teacher and football coach, he said he would not be considered as a backup plan and return to that position.

"I think I was going to be the Plan B; I told them I would not be a Plan B," he reiterated. "If it doesn't work out, the district will have to look within to find a new coach."

Save for a five-year break, Ferguson has been involved as an assistant or head coach at Tucumcari football since 1990. He was a member of that staff when the Rattlers won a state championship in 2002.

He landed the head-coaching job in 2011. His second year was his most successful, when the Rattlers went 8-4, defeated Mesilla Valley 45-0 in the playoff opener, then fell to Hatch Valley 33-13 in the quarterfinals.

He listed a few career highlights - including coaching and winning the North-South All-Star Game in 2016 with his son Tyler, who was one of the players.

But he also cited little triumphs while coaching players over the years.

"You're always going to have some kid that probably shouldn't have been playing football that had some type of success," he said. "Those are the things that stick with me as a coach more than wins and losses - it's helping boys develop into young men who can help the community. There's more important things than wins or losses."