By Steve Hansen
The Staff of The News 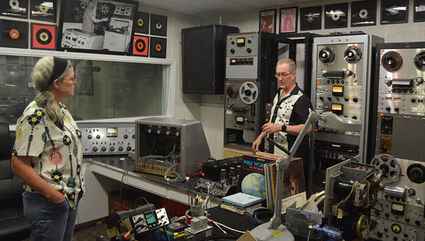 Amy Fisher listens as her husband Jay explains the workings of a tube-based amplifier in the analog music recording studio the Fishers are assembling at the Norman and Vi Petty Museum in downtown Clovis.

CLOVIS - For Jay Fisher, cobbling together an analog recording studio is a labor of love, his own technical skills and nostalgia for the time when he could lay claim to being an extended member of the Norman and Vi Petty family, whose legendary studio became one of the birthplaces of rock 'n' roll.

The Pettys had no children of their own, but since they were good friends with Jerry Fisher, Jay Fisher's dad, Jay Fisher, and his twin sisters Lynne and Lynda were often entertained as kids at the Petty home, Fisher said.

Fisher remembers having taquito-eating contests against Norman Petty when Fisher was a child and even meeting a British musician not known to Fisher at the time named Paul McCartney and his wife Linda, who had come to see the historic studio.

Yes, that Paul McCartney - of the Beatles.

Fisher's dad, Jerry was an electronic technician who was trained in the Air Force and as a civilian worked with radio tower receivers and other electronic gear, Fisher said.

Jerry Fisher did work for Norman Petty occasionally, Jay Fisher said, and he would be paid in equipment.

Since Norm Petty kept up with innovations in recording technology, Fisher said, Petty would often give Fisher's father perfectly good equipment that Petty had swapped out to keep up with the times, Fisher said.

As a result, Fisher inherited a wealth of analog recording equipment when his father died, he said. While some has been sold or given away, Jay Fisher stored enough of that functional equipment to lay the foundation for his project to establish a working, old-school recording studio in downtown Clovis.

Jay Fisher, too, has a strong electronics and electrical background but now makes his living crafting high-end custom knives.

Using space in the Norman and Vi Petty Museum provided through the Clovis/Curry County Chamber of Commerce, and $400,000 in capital outlay grant funds, Fisher and his wife Amy are overseeing a restoration of the kind of studio in which the Pettys recorded the early hits of Buddy Holly, Roy Orbison and other luminaries of the earliest days of rock.

In fact, Jay and Amy Fisher were married in the museum in May. Amy formerly was pastor of First Presbyterian Church in Tucumcari.

Amy Fisher has extensive knowledge of music and musicians, too, she and Jay agreed.

It would be a functioning combination of actual studio equipment that laid down tracks of the first rock 'n' roll hits of the 1950s, and functioning equipment from that era that operates well today.

"We're hoping tourists might come in and make recordings there," Kos said.

Fisher can point to some of the restored equipment in the studio and know Buddy Holly recorded through it, and the analog reel-to-reel tape recorders reproduced music by other musical groups, including Jimmy Gilmer and the Fireballs, the Raton-based band that recorded "Bottle of Wine" a hit from 1968, "Sugar Shack" in 1963, and a song called "Torquay" in 1959 that helped inspire "surfer" music in California in the early 1960s, Fisher said.

Digital recording equipment can consist of a few quite portable control devices and a computer loaded with studio software.

The analog equipment is bulky, but it delivers clearer sound across a wider range of frequencies than digital, Fisher said. It also puts less weight on bottom frequencies, such as bass notes, providing better clarity throughout instrumental and vocal ranges.

The sound of analog recording is truer to live musical sounds, Fisher said, because it records sounds in waves without limits on pitches above those that humans can hear but can perceive in the quality of audible sound.

Digital recording, he said, compromises the natural curve of the sound waves. Digital recording does not pick up the ranges above the audible, often rendering the sound muddy with too much emphasis on lower ranges, Fisher said.

Fisher said there has been a resurgence in analog recording in recent years. Rolling Stone magazine and Variety, both entertainment industry publications, have documented that resurgence, which includes soaring sales of vinyl records, which also are analog. The museum's recording studio also includes a device for cutting original vinyl records.

Renewed interest in analog recording, Fisher said, could attract major talent to Clovis, but he said he wants to ensure local artists and local story tellers can use the studio, too.

Kos agreed. The studio the Fishers are rebuilding will be community-owned and guided, Kos said.

A committee is being formed to guide the studio's development and operation, she said.

Fisher said the studio is expanding to include separate rooms for singers, loud instruments like brass and a long, narrow natural echo chamber, all adjacent to the museum.

And there will be a digital studio, too, he said, to convert music from digital to analog and vice versa.

Kos added the current museum's displays are all static. The studio will offer hands-on opportunities to experience the music history that was made at the Norman and Vi Petty studio, and that opportunity is likely to make the museum a greater draw for tourists.