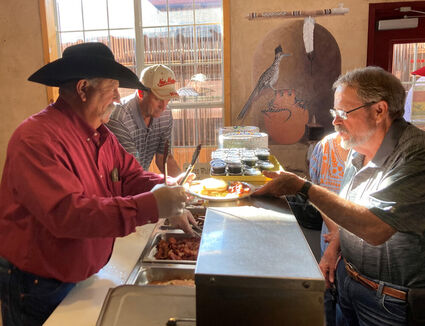 The GOP's candidate for governor missed quite a gathering Saturday morning sponsored by the Quay County Republican Party.

Well over 100 people crowded into the Pow Wow Restaurant in Tucumcari for a pancake breakfast to greet and hear local and state candidates angling for residents' votes for the November election.

Republican gubernatorial candidate Mark Ronchetti had been scheduled to show up at the event, but aides for other candidates said he begged off because he was preparing for an appearance by Florida Gov. Ron DeSantis – a possible presidential candidate – at a Carlsbad rally on Sunday.

Plenty of other GOP hopefuls showed up, however, and delivered brief pitches for attendees' votes. Those included:

The GOP candidate for attorney general, Jeremy Gay, did not attend, but an aide spoke on his behalf. State Sen. Pat Woods is not up for re-election this year, but he spoke as well.

T.J. Riddle, who took payments for the breakfast near the restaurant's front door, estimated about 120 people attended the event. Woods, Chatfield and Fortner, who helped serve up the packages, eggs, bacon and sausage, briefly ran out of food several times during the morning.

Thornton, who attended the Quay County Fair the day before, said Saturday's turnout at the breakfast was "fantastic."

"We're glad we came," Thornton said. "It's clear that people in Quay County are paying attention and want representatives to come here and listen to what the issues are."

The previous GOP gubernatorial candidate, Steve Pearce, told the Quay County Sun in an interview four years ago he needed Democratic votes to be elected. Thornton said that shouldn't be difficult for him and Ronchetti.

"I don't think I have to do much to attract them any longer because they're starting to see the results of progressive policies not only at the national level, but here in the state, as well," Thornton said. "New Mexico is really hurting. You can look at any statistic you want: We are No. 1 in everything bad and last in everything good. When I talk to Democratic voters and what the Republican Party stands for, they find they actually align more with Republican values."