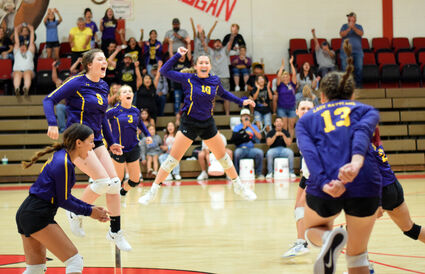 LOGAN - At the end of match point of the Lady Longhorn Volleyball Tournament championship, the Lady Rattlers celebrated like they never had won it before.

That's because they hadn't.

Tucumcari captured its first-ever title Saturday in the season-opening Logan tournament by defeating Springer 23-25, 25-16, 25-17, 25-23. The Lady Rattlers went 3-0 in the tourney and earned a high seed after winning all their games in pool play Thursday.

With Tucumcari clinging to a 24-23 advantage in the final set, a Springer player's serve shanked out of bounds, touching off rejoicing by the Lady Rattlers.

Tucumcari coach Dana Benavidez, after she and her players received their first-place medals, said it was only her second first-place tournament finish in six years of coaching. The other was during her debut season at the Tucumcari Invitational.

Logan athletic director Billy Burns said the Lady Longhorn Volleyball Tournament has been going for more than 20 years, and he couldn't recall the Lady Rattlers ever winning the event before.

"When we can get three touches on the ball, we can put the ball down, and that's what we did," coach Benavidez said.

During the first set, Tucumcari committed five service errors. Benavidez admitted her team was nervous, too.

"None of them had ever been in a situation where they had to play for a championship," she said. "But they fought back once they got it under control. I told them to believe in themselves."

Tucumcari regained momentum with a 9-2 scoring run in the second set and a 7-0 run in the third, winning both.

Springer, led by Brenna Duran's 16 kills, attacked the net with more tip hits and took a 19-14 lead in the fourth set.

"Because we blocked so well in set two and three, they tried to tip over our blocks," coach Benavidez said. "But our setters on that side are pretty fast. They got us a couple of times, but I think we adjusted pretty well."

Caylee Benavidez led the Lady Rattlers with 11 kills, and Alexus Lafferty rocked Elida's defense back on its heels with 12 service aces.

"Elida and Springer, they don't make a lot of unforced errors," she said. "You have to score on them. We needed a good three-touch - a pass, a set, a kill. We executed that."

New Logan head coach Glynna Strand, an assistant to longtime coach Robert Young before he retired, said her team goes through a lot of ups and downs because of its inexperience and lack of seniors.

"We've got a lot of girls who haven't played varsity before," Strand said. "We're just trying to get a feel for each other, and we haven't quite got everything wrapped up where everybody is at on the floor. It will take a little bit for us to gel."

Strand said Springer was "a hard team to play against" because of their defense-minded strategy.

"We had lots of opportunities; we just didn't use them," she said. "We were hitting fluff over when we should have been putting the ball on the floor. They didn't do anything to us; we just did it to ourselves."

The Lady Longhorns went on to defeat Roy-Mosquero and Clayton to win the consolation title.

The Lady Coyotes continued to search for their first win of the season after straight-set losses to Elida on Aug. 23 and to Dora on Thursday.