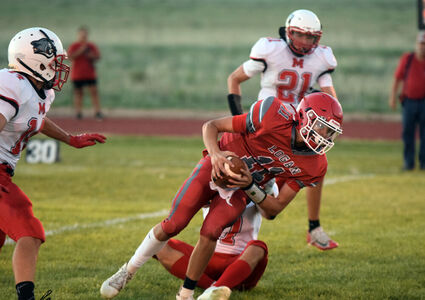 LOGAN - You wouldn't know it from the final score, but Menaul trailed Logan by only two touchdowns during the second period of Friday's non-district game.

The Longhorns responded to the challenge with four unanswered scores in the second half to secure a 54-14 victory in eight-man football action. Logan (3-0) largely dominated despite six turnovers against the Panthers (1-2).

Izaiah Kneitz ran for 111 yards and two touchdowns as the Longhorns racked up more than 400 yards of offense.

Longhorns coach Dwayne Roberts wasn't entirely happy with his team's performance, especially with the turnovers and occasional defensive letdowns. But he acknowledged his team needed a challenge after it had won its previous two games by mercy rule after one half.

"We had our first test of the year, which was good. We needed a test to get us ready for these tougher games that are coming up.

"I felt good with the way we responded after halftime after facing a little adversity. The game never was in jeopardy, but we had to fight through it. If you keep winning games 50-0, you don't know where you're at and what you need to work on. So that was good."

Menaul, which didn't get much from its rushing game, spotted Logan a 26-0 lead midway through the second quarter. Four of the Longhorns' points came off two safeties when errant snaps to the punter sailed over his head or forced a fumble in the end zone.

The complexion of the game changed when Menaul starting quarterback Anthony Jones injured his elbow, forcing Ricky Garcia to take over at the position.

In a four-minute span in the second quarter, Garcia completed touchdown passes of 47 and 11 yards to Zach Toledo. That cut Logan's lead to 26-14 shortly before halftime.

When the third quarter began, the Longhorns didn't waste time reasserting themselves. Kneitz scored on a 47-yard TD run 18 seconds into the period and Kaeden Stoner caught touchdown passes of 28 and 31 yards minutes later.

Roberts said he didn't alter his team's gameplan during intermission.

"We just started playing with the way they're capable of playing," he said. "We started putting pressure on the quarterback, the line started moving them, and we made some big throws. We just played with confidence - that's the bottom line.

"We can't take a half off. We've got to play the entire game with intensity," he added.

Taking a few plays off was what bedeviled his team Friday, Panthers coach Josh Baca said.

"We'll get something going, and somebody will have a mental lapse," he said. "It just ruins our momentum. We've just got to work on being mentally tougher."

Still, he said Menaul looked better than it did last season, when Logan romped to a 50-0 victory..

"We're slowly improving, and we're getting better every week. That's all we can ask for," Baca said.

Logan fullback Park Strong scored on a 15-yard run early in the fourth quarter to make it 54-14.

The Longhorns had another chance at a TD late in the period but fumbled it away near the goal line. In all, Logan lost three fumbles and threw three interceptions.

Logan travels for a 7 p.m. Friday non-district game at Magdalena. The Steers suffered their first loss, 58-8, to No. 1-ranked Melrose last week. Logan faces Melrose in a key district game on Oct. 14.