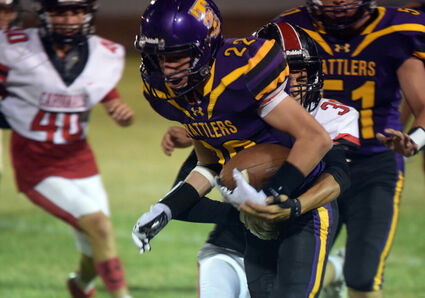 Tucumcari running back Daymion Urioste tries to wriggle through the clutches of Robertson defender Santos Padilla during a non-district game Friday at Rattler Stadium.

A disastrous sequence of five touchdowns allowed in a seven-minute span Friday spoiled Tucumcari's annual Homecoming game during a 56-0 loss to Robertson at Rattler Stadium.

The game ended midway through the fourth quarter due to the mercy rule, b...