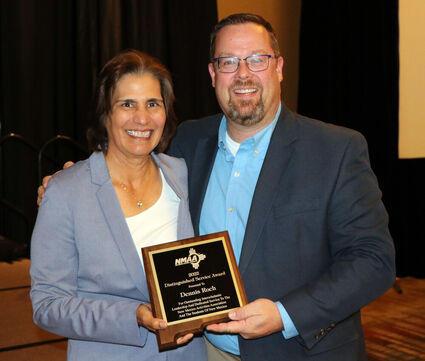 Roch, Josh McCurdy and Neil Swapp received the annual award on Sept. 26 during the NMAA and NMADA fall leadership conference in Albuquerque.

The honorees "have all contributed significantly toward the good of the Association in one form or another" and have "supported interscholastic activities for numerous years," according to a news release.

Roch grew up in Clovis and earned a degree from Eastern New Mexico University. He continued his studies in the Washington, D.C., area to earn his master's while working with U.S. Sen. Pete Domenici.

Roch went on to teach and coach at Texico, was an assistant superintendent in Tucumcari and eventually became superintendent of Logan Municipal Schools.

He served on the New Mexico State Board of Education and a state representative for District 67. He also has served on several committees.

"Having served as a coach, athletic director, and official, I've seen firsthand the impact that school sponsored activities can have on the life of each participant," Roch said in an email. "I'm honored to receive this award, but it's an even greater honor to be contributing to the long-term success of New Mexico students!"

McCurdy, a national champion member and coach of cheer teams, has been a part of Varsity Spirit for 22 years and serves as national curriculum director for the Universal Cheerleaders Association and brand manager for Varsity's V!ROC Choreography. He lives in Memphis, Tennessee, and the NMAA stated he "has been a valuable asset to the NMAA when it comes to the sport of Spirit."

Swapp, a native of New Mexico, received state and national recognition for his high-school concert and marching ensembles at competitions and festivals. His bands have participated in the Macy's Thanksgiving Day Parade and the Pasadena Tournament of Roses Parade. Neil is an adjunct professor at Western New Mexico University and serves as the executive director of the New Mexico Music Educators Association.