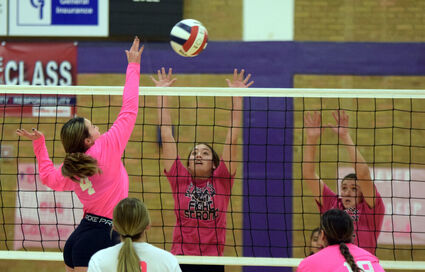 Tucumcari's Caylee Benavidez, center, and July Lafferty try to block the spike of Ruidoso's Guliana McAlister during a district volleyball match Saturday at the Snake Pit.

The return of a starting setter from an injury appears to have turned a struggling Ruidoso team into a sudden district contender during a 25-17, 25-19, 23-25, 25-23 victory over host Tucumcari on Saturday during both teams' district volleyball openers.

The Lady Warriors sported a 2-10 overall record coming into the match. However, they received a big lift with the recent return of senior setter Savannah Mendez from a fractured foot.

"If you have a good setter who can feed your hitters, you'll be good," Tucumcari coach Dana Benavidez said.

Ruidoso coach Marvin Sterrett said he also made adjustments to his offense.

"We also switched up our rotation last week and went a different way," he said. "We've been trying to go with our bigs in the middle and our jumpers to the outside to get better swings on the ball."

The Lady Warriors, which sported a sizable height advantage, edged Tucumcari 40-36 edge on kills and 7-2 in blocks. Presley Huey, who caught attention during warm-ups with her soaring spikes, made a match-high 15 kills while teammate Guliana McAlister totaled 10.

Tucumcari fell to 12-6 overall. Cambree Benavidez led her team with 13 kills, and Haisley Huffman made 10.

Like their opponent, the Lady Rattlers also are in the midst of making adjustments to their offense.

"We're going to work on blocking their strong hitters next time we play them," coach Benavidez said. "We're having to do some readjustments on things, and it makes it difficult. We have some younger kids trying to step it up; we just got to get our flow back.

"My team hustles. They played hard, and they're good teammates," she added. "We just had some unforced errors that cost us some points."

Ruidoso's hitters dominated the first two sets, and Tucumcari seldom had a lead in either.

In the third set, the Lady Rattlers' offense began to assert itself. Tucumcari went on a 6-0 run midway through the match to turn a 9-10 deficit into a 15-11 lead. That slim advantage held the rest of the way.

Sterrett said a lack of confidence often has bedeviled his team, and it sometimes showed during the third set.

"The mind game is tough," he said. "These girls, they practice their butts off. But sometimes they get in the game and they get tired. If we can keep our heads up and keep playing, we're good.

"The key for the game tonight was confidence," he added. "We kept up with the game most of the time and kept playing hard."

In the fourth and final set, neither team had more than a four-point lead. With it tied 23-23, Ruidoso broke through with a kill by McAlister and a sideline-hugging service ace by Rylee Holder.

The match was part of Tucumcari's annual Think Pink event, where both teams wore special pink shirts. The Lady Rattlers wore pink cowboy hats and pink heart-shaped sunglasses during their entrance under blacklights.

Before the match, 11 local breast-cancer survivors or patients were honored with introductions and a gift bag.

A bake sale, raffle and a face-painting booth netted more than $500 that was distributed to two area women fighting the disease.