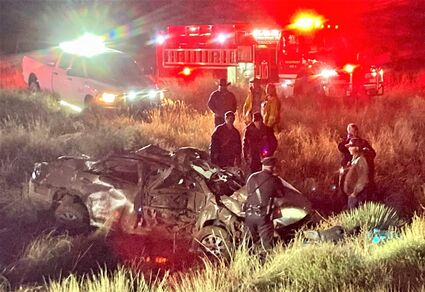 Law enforcement and rescue personnel look over the wreckage of a car that was hit by a freight train Friday night, halfway between Tucumcari and Logan near U.S. 54.

Two people died Friday night after the car they were riding was struck by a freight train halfway between Tucumcari and Logan, reported a New Mexico State Police officer at the scene.

A NMSP supervisor confirmed at least two people were in the car, and both had died. The accident occurred about 7 p.m. on Quay Road Ad, just off U.S. 54.

The identities of the victims were not available. Rescuers were using extrication equipment on the mangled wreck more than an hour after the crash was reported.

A Union Pacific Railroad assistant engineer told state police the engineer had sounded his horn, but the car did not slow at the crossing.

He estimated the southbound train was going about 60 mph at the time of the crash. The car came to rest in a ditch after the collision, about 150 feet from the crossing.

The train wasn't able to stop until it was at least a half-mile down the tracks. The crossing contains no crossing gates or warning lights.

The engineer and assistant engineer were not injured.

More information about the accident will be reported in the next edition of the Quay County Sun.