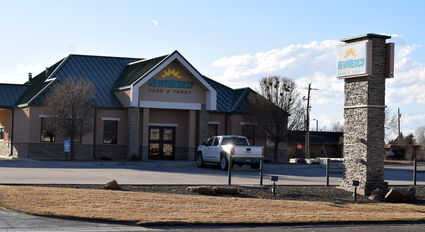 New Mexico Bank & Trust will close its Logan branch on Dec. 14. Without a replacement, that would leave Logan without a bank for the first time in more than a century.

The village of Logan has not been able to attract a new banking institution after New Mexico Bank & Trust is scheduled close its branch there in about six weeks.

It would be the first time in more than a century the village in northern Quay County has been without a bank.

Logan attorney Warren Frost, who has been a point man in the effort to find a new bank in the village, said last week he was pessimistic he would find one by the time New Mexico Bank & Trust is scheduled to close its doors there on Dec. 14.

Frost said he's contacted other banks and credit unions on behalf of Logan, to no avail.

"The amount of loans here is so small, it's very difficult to get somebody interested," he said of the Logan market. "We have a lot of deposits, but not near as many loans."

Frost said he was particularly disappointed Everyone's Federal Credit Union, which has branches in Tucumcari, Santa Rosa and Vaughn, turned down his pitch to add a branch in Logan.

He said he made a presentation to its board of directors in September, and it was rejected about three weeks ago.

Frost said no reason was given for Everyone's Federal Credit Union's lack of interest in the site.

"We're very disappointed they won't come out here," Frost said. "They're based in Quay County, and they've got two other branches. I don't understand why they won't maintain economic development here in Logan and Quay County by opening a branch here."

Court Watson, CEO of Everyone's Federal Credit Union, said in a phone interview Monday it was the board's decision to not place another branch in Logan.

"It wasn't my choice. It was the board's decision, and that's all I can say," Watson said.

New Mexico Bank & Trust initially announced in March it would close its Logan branch in early June, but rescheduled it to Dec. 14 after several local government entities passed resolutions that requested the closing be delayed so a new bank could be found. Several New Mexico lawmakers also asked for a delay in the closing.

New Mexico Bank and Trust President and CEO Greg Leyendecker stated at the time it extended the closing period "to give community leaders time to find another financial institution to service Logan and surrounding areas and also enable us to determine better ways to serve the market area from our Tucumcari Banking Center."

The departure from Logan would be less than two years after New Mexico Bank & Trust acquired it and several other banks in the region during its acquisition of FNB New Mexico in February 2021.

New Mexico Bank & Trust is a subsidiary of HTLF, formerly known as Heartland Financial USA Inc., based in Iowa that operates in 12 states.

Logan's first bank was the McFarland Brothers Bank. It opened in 1904 in a sandstone building at the corner of Second and Martinez streets, which still stands.