'Next Exit' film premieres in Tucumcari 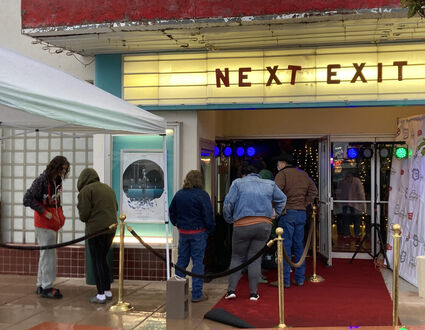 People line up outside the Odeon Theatre in Tucumcari to see the Oct. 24 premiere of the film "Next Exit," which was shot partially in Tucumcari last year.

The Odeon Theatre in Tucumcari last week hosted what is believed to be its first-ever movie premiere - the life-after-death drama "Next Exit," which was shot partly in Tucumcari.

The film's director, co-star and producer attended other showings at moviehouses last week in Santa Fe, Albuquerque and Phoenix, but Tucumcari was the first stop.

Odeon Theatre general manager Christy Dominguez said it was the first time to her knowledge the circa-1935 venue ever has held a premiere, despite the city being a site for other films, including the Oscar-nominated "Hell or High Water."

The Odeon literally rolled out a red carpet at its entrance for the nearly 100 people who attended the screening on Oct. 24. Extra decorative lights were placed near the entrance and in the lobby while "Next Exit" principals greeted moviegoers and autographed facsimiles of the film's poster.

"Next Exit" co-star Katie Parker said before the screening it was "exciting and kind of surreal" to be attending a premiere of the independent movie.

"When you make a film, you're not sure how it's going to go," she said. "But it's gone so well, now that Magnolia (Pictures) has picked us up. Now we're back in Tucumcari, where we shot much of it. It feels surreal over time and space how well it's come together so perfectly."

"Next Exit" will be shown in a few U.S. theaters and be available on major streaming platforms on Nov. 4, said the film's director and writer, Mali Elfman. "Next Exit" has drawn near-universal praise, including a 96% "fresh" rating from critics, according to RottenTomatoes.com.

Elfman, the daughter of Oscar-nominated film composer Danny Elfman, said "Next Exit" was filmed in Tucumcari over about 10 days in January and February 2021.

She said she and producer Derek Bishe, who also attended the Tucumcari screening, scouted filming locations in Tucumcari about six months before production.

Despite underlying anxiety over the possibility of a COVID-19 exposure that would have shut down the production, Elfman said she enjoyed her time in Tucumcari while shooting the film.

"It lived up to all the expectations that we wanted," she said before the screening. "We were able to capture the natural beauty of the night sky and what it feels like to be traveling through the Southwest. As a road-trip film, we wanted that to feel very genuine and not feel too polished, like we were shooting in L.A. It was wonderful to get that authenticity.

"I'm so glad to be here, and this theater is absolutely amazing. I'm so excited the Odeon is hosting us. It's a wonderful night," Elfman added.

Parker said "we had such a good time" in the city during the shoot.

"It was special because it feels like Tucumcari is lost in time a little bit," she said. "I live in Los Angeles and spend a lot of time in New York City. It was refreshing to go to a place like Tucumcari, especially during the pandemic. It felt preserved, like it was in another era. I really liked that about it."

Tucumcari sites used in the film included the Kix on 66 restaurant, the Tristar Inn Xpress motel, the Historic Route 66 Motel and the Roadrunner Lodge Motel. The Route 66 Gas station in nearby Newkirk also was used in a night scene.

During the screening, a murmur of recognition went up from the audience in a scene where co-star Rahul Kohli was eating pancakes inside Kix on 66, with the closed Relax Inn motel in the background.

During a question-and-answer session by "Next Exit" principals after the screening, Elfman talked about the beauty of New Mexico skies. She and Bishe also praised the kindness of Tucumcari residents during the production.

Elfman said "Next Exit" originally was envisioned as a horror film, but it evolved into something else - mainly, the concept of how people respond when a seismic change a leads to upheaval in the world. In the film's case, the big change was science definitively proving there is an afterlife.

"People always read the script and said, 'I don't think that would happen,'" she said. "Then COVID hit, and that's exactly what happened. People suddenly said, 'This is very believable.'"

An audience member noted the film's patient pace in revealing the characters. Elfman, 38, wrote the first draft of the script about 10 years ago but acknowledged the film would have been different if she had made it then.

"As you get older, you learn the value of taking your time," she said.