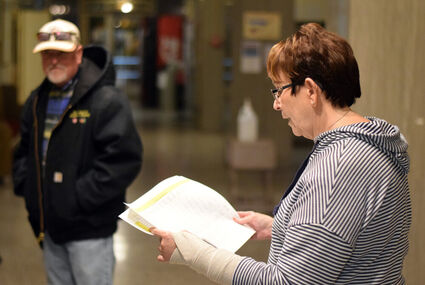 Fortner, 63, a retired schoolteacher, broadcaster and rancher from rural Tucumcari, won by a nearly 2-to-1 margin.

In unofficial totals, he gained 1,982 votes compared to 997 for Wallace, 62, a third-generation rancher near Grady. Fortner prevailed in every precinct in the county.

Wallace commended Fortner for the effort he put into the race.

"I'm sure he overworked me," Wallace said. "I didn't get out and work that hard. I just thought I'd get in (the race); it didn't matter to me either way."

Wallace said he wasn't disappointed by the outcome.

"I've been trying to get off boards," he said, laughing. "I was on the fair board for 40 years; I'm still chairman of (Canadian) Soil and Water. I've got plenty to do."

Fortner, who was broadcasting a volleyball playoff game in Texas when election results came in, said Tuesday night by phone he was "excited" by his victory.

"It was something I never dreamed of until (former commissioner) Sue Dowell started talking to me about it three years ago," he said.

Fortner will be sworn into office after Jan. 1. He replaces current county commissioner Franklin McCasland, who is term-limited.

"I've got a lot to learn, and I look forward to doing anything I can to make Quay County a better place," Fortner said. "Thank you to Quay County."

Fortner prevailed in a five-way race in the GOP primary election earlier this summer. Wallace was unopposed in his Democratic primary.

District 3 encompasses Logan, San Jon, Bard, Nara Visa, Norton and east Tucumcari. The position is at-large, which means every registered voter in the county could cast a ballot in that race.

Fortner vs. Wallace was the only contested local race in the election.

Republican sheriff candidate and current undersheriff Dennis Garcia, unopposed Tuesday after easily winning the GOP primary, gained the most votes of anyone on the ballot, with 2,571.

Garcia also will take office on or after Jan. 1. He will replace current Republican Sheriff Russell Shafer, who is term-limited.

Stephanie Garcia Richard, a Democrat, won 55% to 45% over Republican candidate Jefferson Byrd of rural Tucumcari in the race for commissioner of public lands.

A total of 3,045 registered voters cast ballots in Quay County for 52% turnout - virtually identical to turnout during the previous midterm election in 2018.

White said no problems were observed by her and her workers on Election Day. That followed several smooth weeks of early voting, as well.

White said Monday during a Quay County Commission meeting, however, that a county resident attempted to get a non-U.S. citizen registered to vote during the final week of early voting. (See other story in this edition.)

The county commission on Monday unanimously voted to certify the canvass of area election results. White gave a brief explanation on how the results were tabulated from election judges, voting machine memory cards and then uploaded to the New Mexico Secretary of State's office.

Commissioner Jerri Rush said she received one email that urged her to delay the certification, but she doubted the writer even was a county resident.

Rush said she had no reason to delay the certification.

"I have every confidence you ran a clean election," Rush told White.

White also said 2% of the state's voting machines will be randomly audited later this month.