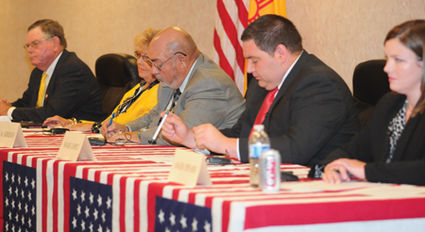 The forum, sponsored by Eastern Plains Council of Governments and held at the Clovis-Carver Public Library, was for candidates in contested races for state offices in the June 5 New Mexico primaries.

• Senate District 7: Republicans Angie Spears and Pat Woods are running against each other, and the winner will face no general election opposition.

• House District 63: Jose Griego of Clovis, in attendance at the forum, is running against Rep. George Dodge, D-Santa Rosa. The winner will face Clovis Steven Hanson, who is running unopposed in the Republican primary.

Questions asked at the forum included:

"What part of illegal," Woods said, "don't you understand?"

Lopez said New Mexicans pay into the system to get a driver's license, and crossing a border shouldn't entitle anybody to the same thing.

"I've been in other countries," Lopez said. "I had my paperwork, I had my documentation."

Crook said her record of voting against the legislation and voting for its repeal speaks for her.

Griego said taking a hard-line stance on undocumented residents wasn't tenable. He said it's a tough issue because it involves human beings.

"You use their sweat and work to make the country good," Griego said, "and now you want to get rid of them?"

Spears said the state absolutely needed to repeal the law.

"It's not an immigration issue," she said. "It's a public safety issue."

• The Utah model: Utah allows illegal immigrants to obtain driver's license, but does not allow any travel outside of the state with the license.

Crook and Woods said Gov. Susana Martinez has indicated she wouldn't sign such legislation, so it's not worth pursuing.

Spears said pushing for a full repeal was necessary because of the opportunity to use the license as a gateway to gain identification in other states, and that New Mexico would be better served putting in a worker program to enable people to become citizens.

Griego said New Mexico shouldn't simply follow what other states do, while Lopez repeated his stance on requiring documentation and declined comment on the Utah model.

• Horse slaughtering: Candidates said they support horse slaughtering operations in the U.S. because the process would have more oversight than in foreign countries and could create local jobs.

Woods and Crook said many horses are dumped like stray animals, and it would be more humane to take them to slaughterhouses. Spears said people who dump the animals aren't trying to do the wrong thing but they have challenges with animals.

"People understand agriculture and what happens at the end of an animal's life," Spears said, noting that other areas of the state might not understand the purpose and benefits of horse slaughtering.

Lopez, the first candidate prompted to answer, said he didn't know much about horse slaughtering rules.

• Working with the opposite party to get legislation through: Griego, Lopez and Crook all gave answers reflecting a philosophy that they go in to represent their citizens and not specific party requirements.

Griego said he would hold town halls in the five counties of the district, while Crook notes a newspaper survey she does with other Republican legislators in the area. Lopez said you have to be willing to work with everybody, even when projects don't have an obvious benefit — he noted that people in eastern New Mexico don't use the Railrunner, but people in Albuquerque won't use the Ute pipeline project.

Spears said as a director for a counseling service, "What I do for a living is listen. I help people create a solution to very difficult questions."

Woods said, "You need statesmanship," and that voters he's talked to are sick of gridlock. There are some values you can't compromise on, but there are always shared goals.

• Allowing for a fireworks ban: Candidates said they would support an initiative that would give individual cities and counties the ability to ban fireworks in times of high fire danger.

"I like fireworks," Lopez said. "If it's green, go for it. If it's dry and brown, keep the fireworks down."

Spears, Crook, Griego and Woods said they support giving that power to local governments. Woods said he enjoys fireworks, but responding to 23 fires as a volunteer fireman and 12-hour shifts on a fire truck make you second-guess anything that's a risk.

• Support of the Eastern New Mexico Rural Water System: Candidates supported the project, which would pump water from the Ute Reservoir to entities in Curry and Roosevelt counties. Woods said concerns of Quay County needed to be addressed via a drought management plan, and Spears said the project needed to be comprehensive and thoughtful.

"We've got to change the way power is produced," Woods said. "New Mexico has plenty of wind, and we need to use that."

Spears said the tax credit is a federal issue and would not come before her. She thinks renewable energy needs to be in the energy portfolio, but it must be sustainable.

Statements were read on behalf of Dodge, incumbent District 67 Rep. Dennis Roch and District 66 candidates Bob Wooley and Dennis Kintigh. Wooley holds the seat, with Kintigh moved in from District 57 due to state redistricting.