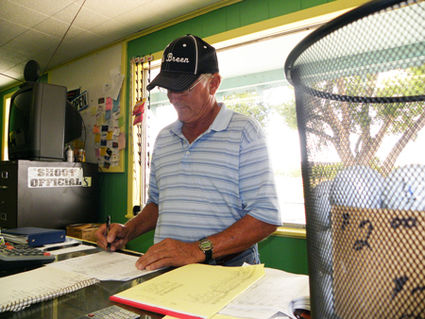 CMI photo: Thomas Garcia Rex Maddaford, the course pro at the Tucumcari Municipal Golf Course, works on paperwork for the annual Vic Breen Memorial tournament. Maddaford, a member of New Zealand's 1968 Olympic team said he has a soft spot for track and field and New Zealand athletes but generally enjoys watching all events and participants.

There's always something for Tucumcari's Rex Maddaford to remember when a running of the summer Olympics comes to his television.

Rex Maddaford, the course pro at the Tucumcari Municipal Golf Course, works on paperwork for the annual Vic Breen Memorial tournament. Maddaford, a member of New Zealand's 1968 Olympic team said he has a soft spot for track and field and New Zealand athletes but generally enjoys watching all events and participants.

But the one thing that isn't familiar to the golf pro, retired teacher and Eastern New Mexico University track standout is the opening ceremony and the lighting of the torch.

Maddaford, representing New Zealand, had a race to worry about.

"I didn't go to the opening because I ran the next day," Maddaford said of his time 44 years ago in the Mexico City Games. "You're on your feet a lot. It is an event in itself, just the opening ceremonies. It takes hours and hours to get that many people aligned."

As a 13-year-old in Auckland, New Zealand, Maddaford became inspired by New Zealand wins in the 1960 Rome Games. That inspired him to get into track and field. He found out others had more speed — he finished last in the 200 and third in the 400 meters. But few had the endurance, as he won his first half-mile race.

A few years later, Maddaford had a chance meeting with ENMU track and field coach Bill Silverberg in Los Angeles. He decided to join the Greyhounds, and helped the squad during its early 1970s dominance. He was a three-time All-American in track and field and was the Greatest Greyhound in 1973. It was also at ENMU where he met his future wife Jeanette. The two married and moved to Tucumcari in 1974, where he spent 31 years as an educator before his 2007 retirement.

Current world-record times in Maddaford's events — 12:57.82 in the 5,000 and 27:01.17 in the 10,000 — were both set by Ethiopia's Kenenisa Bekele in the 2008 Beijing Games. Furthermore, Maddaford said he is amazed to see how times that won medals in Mexico City barely make qualifying marks for current competition.

"The quality of the athletes, all the way around, has improved so much," Maddaford said.

Maddaford credits work ethic for the athletes, but noted the role of technology in training and equipment, and endorsements that allow athletes to train full-time. A big drawback to technology, however, is that an athlete will quickly get in trouble for a fleeting remark online, and effects could be devastating in a very short career arc for an athlete.

While the games are on over the next few weeks, Maddaford will no doubt watch numerous events, with few rooting interests.

"Of course, I've got a soft spot for New Zealand athletes when they perform well," Maddaford said. "But you just appreciate an event on its merit, regardless of who it is in the event."

Track and field events hold a soft spot — even though he admits that distance running gets less coverage since it's not nearly the spectator sport of a sprint. For instance, Maddaford said he enjoyed watching Usain Bolt's dominance in last year's games.

"We go into some events (expecting domination), but that's what makes competition get electrifying so interesting," Maddaford said. "Every once in a while, a young person will take down a world champion. I think that's why we watch it."