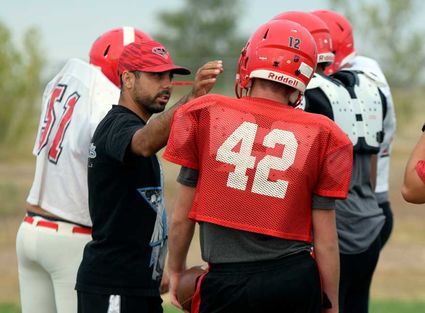 San Jon/Grady saw its postseason come to an end with a first-round loss Friday to Springer/Maxwell in the six-man football quarterfinals.

Meanwhile, three other area teams will see their postseasons begin this week.

The host Devils, playing at Springer, scored early and often Friday against the Coyotes en route to a 72-36 victory in the opening game of the six-man football quarterfinals.

The Coyotes were down just 7-6 in the first quarter, but Springer/Maxwell scored 34 unanswered points to seize control.

San Jon/Grady also committed three turnovers, including two in the crucial first half.

"In the first quarter, we were playing them tough," San Jon/Grady coach Adrian Jones said. "In the second quarter, we had some mistakes and turnovers. But they never got down or fought with each other. They kept their heads up, and I'm proud of them for that."

Chad Becerra scored two touchdowns for the Coyotes, and quarterback Chisum Rush rushed for one TD and threw for another.

The Coyotes ended their season a 4-5, having also lost to the Devils 70-34 on Sept. 28 during a regular-season matchup.

The Coyotes should have a strong team returning next season, as they graduate only two seniors, Ethan Short and Andrew Erwin. Both were first-year players for the Coyotes, as Short was a transfer from Portales, and Erwin came out for football for the first time.

"It's too bad they don't get another year," Jones said.

The Longhorns briefly held leads of 12-8 and 20-15, but the No. 1-ranked Warriors scored 28 unanswered points in the second and third quarters to secure a victory Friday in the regular-season finale.

"I'm really proud of my kids last night," Logan coach Chase Disney said. "No one in the state thought we were going to hang around with Gateway. Our kids showed a lot of heart. They played all four quarters."

For Logan, Chase Hittson ran for 126 yards and two touchdowns on 14 carries. Kyle Knight ran for 95 yards on 23 carries and Jantzen Paris ran for 86 yards on 11 carries, with each scoring a touchdown.

Gateway Christian held the edge on offense, racking up 534 yards to Logan's 394.

A terrific defensive effort by Santa Rosa held previously undefeated Fort Sumner/House, which had averaged more than 40 points a game before Friday's clash, scoreless until the fourth quarter during a 22-8 district victory at Fort Sumner.