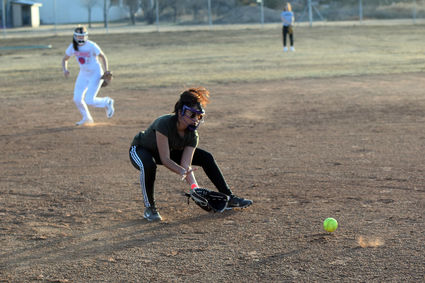 The Tucumcari softball team has a new coach, but much of the same team from last season.

Oglesby said he was confident he can do the job.

"I've played softball all of my life, and I've coached all-stars in baseball," he said. "The experience, I've got all that down. It just getting the kids to buy into it."

The Lady Rattlers' first game is March 26 at home against rival Santa Rosa.

Hitting shouldn't be a problem for Tucumcari. The Lady Rattlers sported a robust .665 slugging percentage last season. The team is missing a few players playing basketball, including all-district left fielder Jasmine Jones and her team-high 20 RBI and a .552 batting average.

Other basketball players projected to take the field will be Melanie Jones and Kalani French, each who hit .444 last season. Also returning is catcher Loren Chavez, who hit .529 with a .882 slugging average last year.

"That's one of our strong points, hitting," he said. "On defense, we've got to knuckle down. Defense is going to be the key. That, and accurate pitching."

Tucumcari remains thin at that position. Oglesby said he's trying out two eighth-graders, one of which might become the team's No. 2 hurler.

In the meantime, Oglesby said he'll rely heavily on junior Jayden Jimenez, who sported a 5-4 record last year with a 3.57 ERA.

"She's ready to take the load," he said. "She's our captain this year. She's really stepped up to become a leader. She's learned a couple of more pitches. She's got that in her arsenal, and that's going to help a lot."

Tucumcari is pitted in the same district as state champion Dexter, but Oglesby remains optimistic his team can prevail in that division.

"I think we have a good shot at winning district, actually," he said. "I've looked over the rosters of Dexter, East Mountain and Sandia Prep, and they lost a lot of players last year. They're relying on a lot of young talent. If we hit and play errorless ball, there's no reason we can't win."