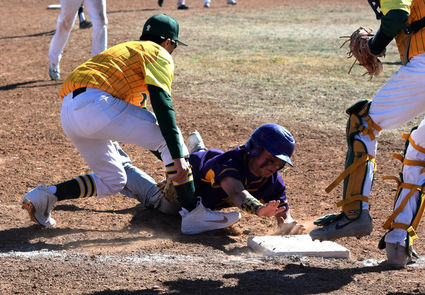 West Las Vegas pitcher Omar Gallardo tags out Tucumcari's George Gutierrez at third base after a rundown during the second game of a doubleheader Saturday at Tucumcari.

The first day of baseball season often reveals problem or two a team needs to remedy. In Tucumcari's case, that list of problems proved to be lengthy.

Errors, balks, walks and blunders on the bathpaths proved fatal for the Rattlers in 12-1 and 21-2 losses during their season-opening home doubleheader Saturday against a fundamentally sound West Las Vegas team.

Tucumcari didn't look like the same team that had advanced to state quarterfinals last season.

"We've got a lot to work on," Tucumcari coach Dwayne Roberts said. "I can't tell you why we had so many errors. It was bad. Hopefully, they'll take this in the gut and want to get back at it. We've got to build from here."

In the opener, West Las Vegas (2-1) scored two in the top of the first inning with a double, an error, a balk and two singles. Tucumcari's pitchers wound up committing five balks in the first game.

In the bottom half of the inning, Tucumcari's George Gutierrez led off with a single, stole second and scored on two wild pitches to close the gap to 2-1.

The Dons scored 10 runs in the third on four hits, six walks, two errors and two wild pitches, chasing tiring Tucumcari starter Ryan Birch from the game after 83 pitches. E.J. Martinez relieved and was mostly effective, but the game ended after five innings because of the 10-run mercy rule. Of the 12 runs the Rattlers allowed, nine were unearned via six errors.

In the second game, the Dons opened with four runs on two walks, three hits and two errors.

Tucumcari closed the gap to 4-1 when Joey Dysart walked, advanced on a wild pitch and scored on starting pitcher Alijah Jimenez's single in the bottom half of the inning.

West Las Vegas scored three runs in the second inning and two in the third for a 9-1 lead on two hits, five errors, two walks, a hit batter, a balk and a wild pitch.

Tucumcari lost potential scoring chances from baserunning flubs. The Dons caught Gutierrez in a rundown between second and third base to end the third inning. In the fourth inning with two out and Birch on third, he misunderstood his coach's instructions not to advance during a teammate's at-bat and was tagged out trying to steal home.

The Rattlers added a run in the fifth when Dysart drew a bases-loaded walk to make it 9-2.

West Las Vegas scored 12 runs in the sixth. The Dons chased starter Jimenez from the game with four singles and an error. The next three relievers - Vicente Sapulveda, Matthew Lopez and Isaac Arias - combined for nine walks and two hits.

"It got to the point in the second game, we wanted to get a few of those guys on the mound and see what they could do," Roberts said. "We've got to find some pitchers."

Dons starting pitcher Omar Gallardo wasn't as dominating as his predecessor. But he benefited from his team turning a 4-6-3 double play to help kill a rally during the fourth. The Dons also executed a 1-6-3 double play to end the game.

Tucumcari's next game is at 4 p.m. Monday at Melrose. In light of the issues Saturday, the Rattlers coaches will be kept busy.

"We have a week to prepare for the next game, and we'll see how it goes," Roberts said.