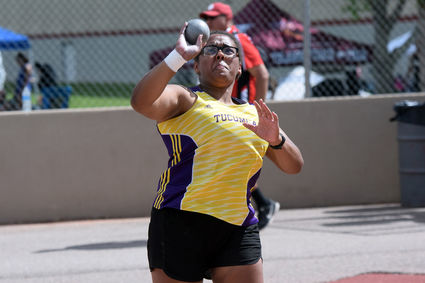 Tucumcari's Secilee Skinner prepares for the shot put competition Saturday at the UNM Track-Soccer Complex in Albuquerque. Skinner finished second in the event and fourth in the discus Friday.

However, the Rattlers finished a somewhat disappointing fifth place with 39 points in the Class 3A team standings and just a few points away from the runner-up spot. Coach Wayne Ferguson attributed that to a hamstring injury Josh Chavez suffered during the weekend, hampering Tucumcari's chances in several events.

Martinez won the 110-meter high hurdles in 15.69 seconds, defeating his closest foe, Tularosa's Patrick Hooten, by nearly a second. In the 300-meter hurdles, he finished in 0:40.12, more than two seconds faster than runner-up Donovan Roberts of Sandia Prep.

Martinez said he was glad he didn't have to compete in the finals amid Friday's cold and wet weather and acknowledged "holding off" in the preliminaries for fear of pulling a muscle.

"There was a runner right behind him, and they got their feet tangled up and he ended up taking a bad stride and popped his hamstring," Ferguson said. "He showed some guts in even trying to finish the race. We took him to the trainer's table to evaluate whether it was something he could work through, and it wasn't."

"We had to scratch our 1,600-meter medley relay, because he's about the only 800-meter person I have," he said. "There's nine or 10 points we lost out on just by losing him. You add those points, and we're in second place, for sure.

"Injuries happen, and you can't prepare for them. We just didn't have enough to overcome that. Everything else went according to plan."

Tucumcari led for much of the final event of Saturday - the 1,600-meter relay - until St. Michael's caught up on the last lap and won it in a state-record time of 3:26.95. Tucumcari finished in 3:27.33, just three-hundredths from a state-record time.

"The kids were kind of upset because they were defending state champions of that event, but sometimes you go up against a better opponent," Ferguson said. "If that happens, you have to hold your head up high."

Other boys events that figured in the points totals for Tucumcari:

Girls events that figured in the points totals for Tucumcari: