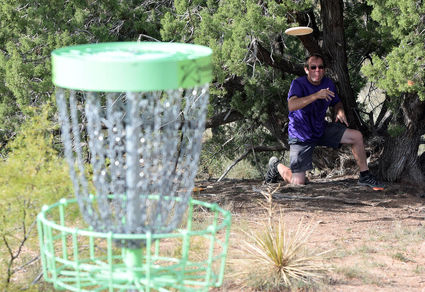 Jeff Lewis of Albuquerque attempts a putt from beneath a tree near the 10th hole Sunday during the third annual Shootout at Six Shooter Siding at Robert Lumpkin Memorial Disc Golf Course in Tucumcari's Five Mile Park. Lewis made the shot to save par.

Noah Baker of Amarillo knew he had the talent to excel at Robert Lumpkin Memorial Disc Golf Course in Tucumcari's Five Mile Park.

But he didn't play well during his last three tournaments. His biggest obstacle was "between the ears," as he put it....