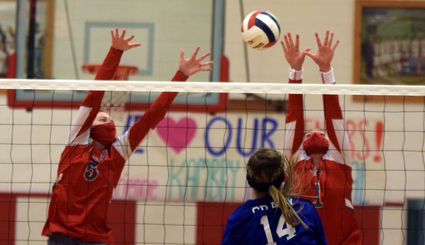 Logan's Kambry Burns, left, and teammate Reece Goldston attempt a block against Grady attacker Teryn Foote during the season-opening match for both teams March 3 at Logan.

LOGAN - Grady's volleyball team had grabbed the momentum by winning Game Three, held a six-point lead in a Game Four of the match and seemingly had host and longtime arch-rival Logan on the ropes during both teams' season openers.