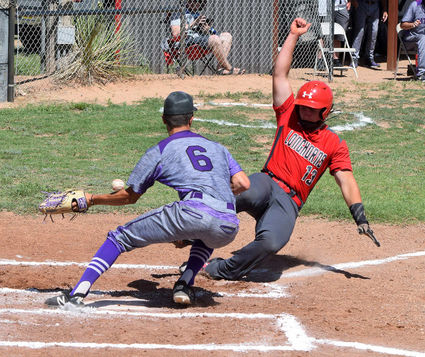 Logan's Park Strong slides into home plate to score as Gateway Christian pitcher Hayden Wigley misses the throw from his catcher after a wild pitch during the first inning in Friday's game at Logan.

LOGAN - Logan's baseball team exacted revenge after its first loss of the season earlier in the week with a doubleheader sweep Friday of Gateway Christian.

In the first game, the Longhorns came from behind with an 11-run fourth inning during a 17-9 victory. In the nightcap, Logan staked an early 7-0 lead and held on for the 11-9 win.

The Longhorns improved to 12-1 overall. Gateway Christian, which won a state title in 2019, fell to 8-4. Both teams have a good chance of facing each other again during Class 1A playoffs later this month.

After spotting Gateway a 2-0 lead in the top of the first on three hits and a wild pitch, Logan answered with five runs in the bottom of the frame on just one hit. Gateway starting pitcher Hayden Wigley struggled with his control, walking three and hitting a batter. The Warriors also committed three errors.

Gateway closed the gap to 5-4 after three innings. In the top of the fourth, Gateway took an 8-5 lead on Jace Worley's bases-loaded triple and an RBI single by Wigley. That chased Logan starting pitcher Gabe Milakovich from the game, who allowed seven earned runs in 3 1/3 innings.

In the bottom of the fourth, Logan sent 15 batters to the plate to score 11 runs for a 16-8 lead. The Longhorns banged out nine hits during the inning and were helped by three Gateway errors.

"Instead of them having one big inning, we had the big inning," Logan coach Kyle Griffiths said, referring to his team's loss earlier in the week. "That was the difference in the game."

Kaeden Stoner played a crucial role in the victory. In addition to allowing just one run in 3 2/3 innings of relief, he went 3-for-4 hitting with three RBI. Teammate Wyatt Wright also drove in three runs.

"He did a good job, threw a lot of strikes," Griffiths said of Stoner's pitching.

The Warriors' defense, especially in the outfield, looked shaky amid gusty winds at Logan's ballpark. Several hits bounced by Gateway's outfielders and rolled to the fence, leading to extra bases for Logan.

"The wind was really swirling out there today, and we knew it was going to be difficult if we hit the ball in the air," Griffiths said. "They missed a bunch of pop flies they normally would have caught."

In the second game, Logan's Dante Sanchez went the distance on the mound, allowing five earned runs and striking out nine. He also went 4-for-4 hitting, stole six bases and scored four runs.

Park Strong also went 4-for-4 at the plate for Logan, with two RBI on two doubles. Wright also had two RBI.

Logan suffered its first loss when host Gateway rallied with seven runs in the fifth inning to earn a 10-8 victory on June 8.

Logan had led 7-2 after four innings. Then the Warriors began their comeback in the fifth.

"We walked a couple of guys, then made a couple of errors in the field, and then they got a few hits ... just kind of mushroomed in that inning," Griffiths said. "We didn't hit the ball well and left a lot of guys on base.

"I'm hoping it was a learning experience," he added. "We are the batter team in my opinion, but we have to limit our mistakes."

Brock Burns hit a two-run double during the game for the Longhorns.