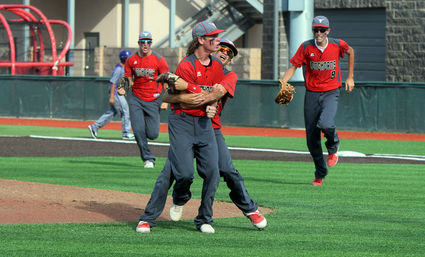 Logan relief pitcher Kaeden Stoner is hugged by a teammate after the Longhorns secured the final out of their 16-7 victory Thursday over Gateway Christian in the Class 1A baseball championship at Santa Ana Star Field in Albuquerque.

ALBUQUERQUE - At one point of Logan's Class 1A title game Thursday afternoon against Gateway Christian, the Longhorns trailed 3-0 while storm clouds began to loom over the University of New Mexico's Santa Ana Star Field.

As it turned out, the approaching storm also was Logan's offense.

The Longhorns (15-1), the No. 1 seed in the tournament, scored five runs in a second inning sandwiched around a one-hour lightning delay, igniting a 16-7 come-from-behind victory for their first-ever baseball state championship.

It also was the Longhorns' second comeback victory of the week.

Logan senior starting pitcher Dante Sanchez endured a shaky start to pitch five innings for the win. He helped his cause by scoring four runs and driving in two as the Longhorns' leadoff batter. Sophomore catcher Park Strong added three runs scored and four hits, including a three-run homer late in the game to leave little doubt about the final outcome.

Freshman pitcher Kaeden Stoner pitched two strong innings, with three strikeouts, to close the game. During the final out, he didn't quite glove a shot up the middle, but he scrambled to grab the ball near the mound, gunned a throw to first retire the batter and spiked his glove in celebration. Teammates then hugged him and each other during the rejoicing of their state championship.

After his celebrating players drenched him with icewater from a dugout cooler, Logan coach Kyle Griffiths said he had an early-season hunch his team might go all the way.

"I knew coming into the season we'd be really good because we had a bunch of young kids coming up that have been playing baseball for a really long time and have a lot of experience," he said. "Add to it those seniors we already have, I knew we were going to be tough."

In addition to Sanchez, other seniors who ended their Logan prep careers with a state title were Gabe Milakovich, Wyatt Wright, Garrett Bollinger, Kaden Riggs and Jordan Evans.

In the first inning, Gateway pushed across a run without a hit when a jittery Sanchez walked three batters and hit another with a pitch. The Warriors scored on a wild pitch.

"It was his first time in a state championship," Griffiths said. "When you come out here to this big field, it's going to be a little nerve-wracking."

In the second, the Warriors fattened their lead to 3-0. Hurley Breedyk hit an RBI triple after a Gateway batter reached base on an error. After a walk, the Warriors scored again on a double steal.

In the bottom half of the inning, light rain began to fall as Milakovich hit an RBI single, driving in Wright after he singled. After advancing on an error and a passed ball, Milakovich scored on a wild pitch.

Sanchez was about to come up to bat with two runners on base with two out and his team trailing 3-2 when nearby lightning prompted a halt in the game. Fans were ordered out of the metal bleachers to their vehicles in the parking lot. The game was suspended for a little more than an hour as the storm rumbled through the region.

When play resumed, Sanchez drove in two runs with a single, stole two bases and scored on a wild pitch for a 5-3 Logan lead.

"Once I got that blooper over first base (for a hit), that seemed to hype us up a bit," Sanchez said. "We got excited, and our sticks started rolling.

"I was a bit nervous in the first inning. I was a bit scared," he added. "But I knew my guys had my back through the game, and I'm proud of them and what they did. We showed what we're all about."

Griffiths said that rally was key in setting a mental tone for his team.

In the third, Brock Burns singled, advanced to second on a wild pitch and scored on a third baseman's error for a 6-3 lead.

The Warriors responded in the fourth on Caleb Bogle's RBI single and Breedyk's two-run inside-the-park homer. Breedyk's blast soared into the left-field gap and rolled to the fence more than 400 feet from home plate. He circled the bases without a play at home. The game was tied 6-6.

Logan scored three in the bottom of the inning on a hit batter, two walks, a single, a wild pitch and an RBI double by Milakovich.

The Warriors closed the gap to 9-7 with a walk, a wild pitch and a single.

The Longhorns increased their lead to 12-7 with three singles - including an RBI hit by Wright - two wild pitches and a walk.

Logan began the sixth when Skyler DeLuca reached base on a dropped third strike. Bollinger and Sanchez walked. Stoner hit a sacrifice fly to score one run. Strong smacked an opposite-field drive near the first-base line that rolled all the way to the wall for a three-run, inside-the-park homer. That gave Logan a 16-7 lead.

Second-seeded Gateway (12-5), which lost three of four to Logan this year, received no favors from its pitching Thursday. In addition to eight walks, its three pitchers combined for 10 wild pitches or passed balls, putting many Logan runners in scoring position.

Warriors coach Mick Reeves, whose team won the Class 1A title in 2019, didn't voice much disappointment with his squad.

"We fought the whole game. One thing I told the kids is we never gave up. There's no quit," he said. "Logan's a good team. We battled them for four games, and we just fell short. It was their day, and we had a lot of young kids playing. We've got a lot to improve with that."

Sanchez was succinct in his assessment.

"We came to play ball. Gateway's a great team, but we're just better," he said.

Logan punched its ticket to the state-championship game with a 9-5 come-from-behind victory June 22 over fourth-seeded Magdalena at the Longhorns' home field.

Down 3-2, Logan scored five runs in the fifth inning to take a lead it wouldn't relinquish. Winning pitcher Milakovich hit a two-run double in the sixth to add valuable insurance runs.

The Longhorns' big rally occurred on five straight hits (including two doubles), two wild pitches and two costly outfield errors by the Steers that allowed singles to roll to the fence for extra bases.

"They're really good hitters," Magdalena coach Kyl Candelaria said of Logan after the game. "They put the ball in play where we couldn't get to it, and that was the difference."

"We got a couple of innings where we really hit the ball well," Griffiths said. "And Gabe pitched really well."

Milakovich allowed six hits, walked one and struck out eight in 6 2/3 innings for Logan.

In addition to Milakovich, Logan's star player was Strong. In addition to driving in two runs, he threw out three runners trying to steal. Candelaria acknowledged Strong's arm made his team less aggressive on the bases and probably saved at least one run for the Longhorns.

"We couldn't even get a good lead (on the basepaths)," Candelaria said.

"Park's a good catcher; that's why he's back there," Griffiths said. "He's done it for years, and he's experienced. We knew he'd have a good chance of throwing some of them out."

Strong also was on the end of a key defensive play. With one out in the sixth, Magdalena loaded the bases on three singles. The next batter lofted a fly ball to right. Right fielder Zack Byrd caught it, threw to cutoff man and second baseman Burns, who in turn threw home to Strong to tag the runner trying to score. Players in the Logan dugout erupted in appreciation.

"It was a big play at the time," Griffiths said.

Stoner, who earned the save with one-third inning of relief, also had three hits and scored three runs.