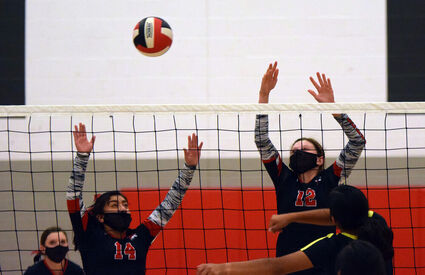 SAN JON - If the eastern New Mexico region gave a Most Improved award for volleyball, San Jon probably would be a contender.

San Jon's serving attack kept the Lady Pirates on their heels much of the match, and the Lady Coyotes' net attack gained momentum as the evening progressed.

"We served much better tonight, and we hit much better," San Jon coach Jaree Elliott said. "We had Bailey McEwen step up and be a big hitter, and I've been needing that to happen. We had big plays at the net, and Dakota Fisher passed the ball well.

"We trust each other, and the system seems to be working. That's what we've got to stick with," she added.

Describing her team's improvement as "immense" from last season, even her players noticed the difference while watching game film Wednesday of their season-opening match against Roy-Mosquero.

"We watched the video yesterday, and they said, 'We're not even the same team anymore,'" Elliott recalled. "I said, 'You're not, so show it tomorrow on the court.' And they did."

Elliott said she was grateful her team continued to excel despite the absence of two players. Addie Lafferty and Charmaynn Hall were out of town at a state livestock show.

"Addie won reserve grand champion at the stock show, and Charmaynn won New Mexico-bred, so it was worth it," she said.

Elliott admitted her freshman-rich squad was intimidated much of last season.

"I never dreamed that jump to high school would scare them as much as it did," she said. "Three games in, I figured out they were scared to death, and I would just have to pull them through it.

"Thankfully, this year's freshmen didn't respond that way. The sophomores blazed the trail to take the hard year, and the freshmen this year seem more confident."

Roy-Mosquero was led by Arantza Covarrubias' 11 kills, four aces and one block.

"We battled hard all weekend and fell short in our bracket-play games," Tucumcari coach Dana Benavidez said. "We will keep fighting and keep improving."

Tucumcari fell to 4-8 on the season.

The Lady Longhorns avenged an earlier loss to Santa Rosa at the Tucumcari Invitational by defeating the state-ranked Lady Lions 19-25, 25-17, 25-19, 25-22 on the road on Thursday.

"We looked much improved from our first meeting in the Tucumcari tournament," Logan coach Robert Young said.