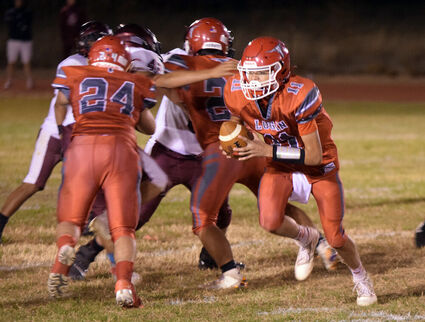 Logan quarterback Brock Burns gets blocking help from teammates as he carries the ball during an eight-man playoff game Friday against Magdalena at Logan. Burns threw for 122 yards and one touchdown during a 24-18 victory.

LOGAN – The Longhorns scored the go-ahead touchdown with less than five minutes left, then their defense stopped Magdalena in Logan territory to preserve a 24-18 victory Friday in the state quarterfinals of eight-man football.