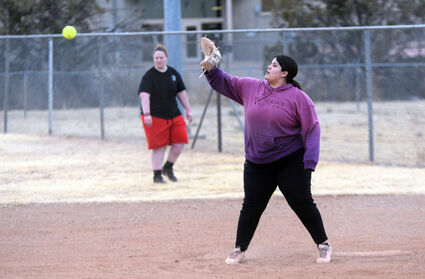 Tucumcari first baseman Sierra Valverde takes a throw from a teammate during infield drills at the Tucumcari High School softball field on March 1. In the background is volunteer assistant coach Melanie Jones. The Lady Rattlers' first home game is a doubleheader against Clayton on March 15.

Tucumcari coach CJ Oglesby admits he's had sleepless nights about his softball team, but it's for the right reasons.

It's because this year's team reminds him of the Lady Rattlers squad in 2019 that finished with a best-ever 17-5 record and its first postseason berth and a highly promising 2020 team whose season was abruptly canceled by the COVID-19 pandemic.

"We're more well-prepared than any other year. It's all because of the will of the players who want to get better," Oglesby said before a practice session at the softball field last week. "It's exciting. It's got me losing sleep, but it's a good thing."

Tucumcari's season opener will be at Raton on Saturday.

The Lady Rattlers' home opener will be a doubleheader against Clayton on March 15. Oglesby said a true barometer of his team's potential will be during the Santa Rosa Invitational tournament on March 17-19.

Tucumcari's very young team finished with a 3-14 record last season. This season's team still is young, with only two seniors, but Oglesby said he's been impressed by the players' desire to improve.

"They remind me of that (2020) team that missed out during that season - their work ethic, the way they want to get better," he said. "There's been a lot of improvements in the off-season. It's remarkable."

That 2019 team still continues to pay dividends for the program. Two players from that squad - first baseman and third baseman Melanie Jones and pitcher Jayden Jimenez - are volunteer assistant coaches after Oglesby asked them to help.

"Mel's been a real big help," he said. "I couldn't ask for a better assistant coach, to tell the truth. The Joneses are all hard workers, and she came to mind. It's worked out for the best.

"And Jayden always was a hard worker. They've stepped in, and they enjoy it."

Asked about his team's biggest strength, Oglesby didn't hesitate with his answer - defense.

"I've never had a team like this that's so packed in the infield and outfield with ability," he said. "I've got three girls I can put at shortstop - Alexus Lafferty, Sage Knapp and Harley McKinney."

"She's so determined to get better," he said. "She works her butt off, and she stands out tremendously on her work ethic."

Sierra Valverde, a junior, will be the Lady Rattlers' first baseman, whom Oglesby said has become a potent hitter. Returning at catcher is sophomore Amaya Infante, who showed plenty of grit at the position last year.

"They've been working in the offseason to get more consistent, throwing strikes," Oglesby said. "They're working on different pitches right now. They've pitched live, and they're doing good."

Oglesby also expressed optimism his team's hitting will be better this season - especially with four or five left-handed hitters in the lineup.

"We work on a lot of hitting in the gym with the batting cages," he said "The pitching machine has been out like crazy. I want to score a lot of runs this year, but our defense is going to be tough."